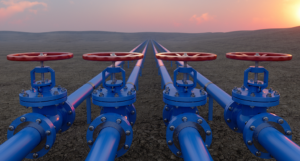 If 2021 was the year of proliferating net zero pledges, 2022 will be the year these ambitions are put into motion and scrutinised. The UN, already concerned with the credibility and transparency of these decarbonisation plans, is planning to set up a body to assess net zero pledges from the private sector. And just recently, a report analysing 25 of the world’s largest companies concluded that their headline pledges lack integrity as they are not backed by robust emission targets. Scientifically, net zero trajectories need to initially fall steeper than a linear line to net zero to ensure sufficiently swift impact and avoid overshoot of CO2e emissions on the path to 2050 (see visual below).

The oil and gas sector’s decarbonisation strategy is the most imperative to get right, being the most polluting industry. From a ‘Just Transition’ perspective focusing on a sufficient impact with fair burden sharing, those who contributed most to the problem of climate change (e.g., developed countries) should commence decarbonisation earlier than those who barely caused the problem (e.g., developing countries). An equivalent logic applied to sectors would mean that sectors such as oil and gas should decarbonise much earlier than newer activities. Decarbonisation models based on economic efficiency instead of just and sufficient transition, however, tend to permit sectors such as oil and gas to decarbonise later since their efforts are more costly. Specifically, economic efficiency focused decarbonisation results in a curve which starts even flatter than a straight line down to net zero (red curve on visual), while impact sufficiency focused approaches are characterised by a curve with a steep initial decarbonisation (green curve on visual).

There have been various investor-led efforts to measure and assess the net-zero ambitions of the oil and gas sector. These enable dialogue and provide a treasure trove of information for the enthusiastic investor looking to decarbonise their portfolio.

However, the standards of these benchmarks and assessments are not necessarily demanding enough from a scientific perspective and may not yet take into consideration all important criteria when assessing the feasibility of a 1.5°C net zero strategy. Indeed, many investor initiatives appear comfortable with the economic efficiency logic and trajectories which are initially flatter than a linear line to net zero (red curve on visual). Adhering to this logic, a company self-declaration to get to a net zero by 2050 target may even be considered “aligned” by an investor initiative despite the same company’s short and medium targets being visibly not aligned. Scientifically, such companies cannot be considered consistent with a 1.5°C warming scenario as the cumulative absolute emissions from those strategies would undoubtedly contribute to an overshoot of our carbon budget.

In our view, all investor initiatives should ensure that the plans they scrutinise are aiming to ‘carve the right curve’ to net zero. Having a 2050 target is important, but having robust, scientific, short and medium targets to pave the way are what makes the difference between an initially steep and an initially flat curve to net zero. Initially steeper curves closely link to our 1.5°C carbon budget. Initially flat curves highlight efforts made just before the net zero target, ending very likely in an overshoot of our carbon budget.

Intensity is useful for comparison of industrial innovation between companies but it does not necessarily represent climate action. Our planet’s warming outcome is determined by the relationship between absolute aggregate emissions and our carbon budget. As we will explore further down below, organisations should be encouraged to set their emission targets in absolute terms as suggested at COP 26.

It is imperative that net-zero strategies cover the full lifecycle of emissions (including scope 3). Operational emissions (scope 1 + 2) represent approximatively a fifth to a fourth of oil and gas company emissions. Disappointingly, many oil and gas companies ‘leading’ decarbonisation efforts in the sector still set the majority of their targets without covering scope 3 emissions.

Some investor initiatives do not include all scope 3 emissions and are comfortable limiting themselves to only scope 3 emissions which they consider relevant to their portfolio risk. While this is understandable from a financial materiality perspective (i.e., effect of planet on company), it is insufficient from an impact materiality perspective (i.e., effect of company on planet) and both types of materiality should really be considered by those who adhere to the double materiality concept.

According to the IPCC, only strategies that highlight a 45% decline of absolute emissions by 2030, and reaching net zero by 2050 can be 1.5°C aligned. A credible net-zero strategy will have a carbon budget, demonstrably linked to the global carbon budget to limit warming to 1.5°C. A scientific strategy will acknowledge that the relationship between aggregate absolute emissions and the global carbon budget determines this warming outcome, and that hence the pace of the emissions reductions is crucial. Consequently, a ‘1.5°C aligned’ net zero by 2050 target is not enough – robust short and medium-term targets are imperative. By robust, we understand that they should cover scope 3 emissions, be expressed in absolute emissions, and cover global activities and full production (upstream and downstream). Short- and medium-term targets also bind companies to act immediately, rather than backload actual carbon reduction efforts. Investor initiatives should increase their emphasis of 2030 targets, an objective which was also strongly endorsed at COP26.

Usage of carbon capture technologies is a must in order to offset emissions that cannot be cut and to stay in carbon budget in time. A good net-zero strategy will quantify and frame the planned usage of these technologies and ensure that usage is robust or regulated. Acquiring emissions allowances through the EU’s Emission Trading Scheme (ETS) for instance results in more demand and thereby increases the carbon price for polluters. Voluntary exchanges can also be suitable, but one must ensure that offsetting is done via actual carbon capture (i.e., GHG removals) rather than the complex carbon counterfactual calculations claiming an (un)certain level of GHG avoidance that may have been created through a project.

Credible net zero strategies will carefully consider how to utilise these technologies and understand that they cannot be used to excuse new production of oil and gas, or slow absolute emission reductions. Investor initiatives should call for a credible, transparent, and comparable 1.5°C aligned industry-standard approach to reporting offsets and ask to vote more often on climate strategies at the annual meetings of oil and gas companies.

2022 will be the year we start scrutinising last year’s net zero pledges from the oil and gas sector (and beyond) – let’s make sure we are looking out for the right things. Investor initiatives adhering to impact sufficiency should embrace approaches characterised by a sufficiently steep initial decarbonisation. Only then can we ensure to carve the right curve to net zero by 2050.