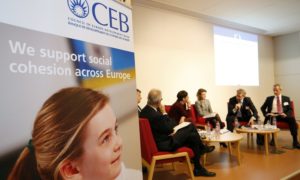 Investors have bought into a new €500m social inclusion bond from the Council of Europe Development Bank (CEB), the European institution set up more than 50 years ago to deal with post-World War II refugee upheavals and which is now helping to deal with the continent’s current migrant issues.

Investors going into the inaugural seven-year issue, which the CEB is calling a “landmark issuance”, included pension funds, insurers and other investors; investor interest was put at more than €1bn.

It follows the launch of the CEB’s new Social Inclusion Bond Framework, which has a second opinion from ESG house Sustainalytics.

The proceeds will go to financing loans to support social housing, education and vocational training, and job creation and preservation in micro, small and medium-sized enterprises.

Sustainalytics’ opinion is that the proceeds “will have clear positive social impacts”. These include the social inclusion of vulnerable populations, and achieving various UN Sustainable Development Goals relating to poverty, education, gender equality and sustainable cities and communities (SDGs 1, 4, 5, and 11).“This landmark issuance is a proud moment for the CEB,” said CEB Governor Rolf Wenzel, “and a major step towards promoting social cohesion in Europe within the framework of the CEB’s new Development Plan 2017-2019.”

That plan, published earlier this year, refers to the “massive influx” of refugees in 2015, which also led to the Paris-based CEB setting up the Migrant and Refugee Fund grant-based instrument.

“This landmark issuance is a proud moment for the CEB”

The CEB says social needs “remain pressing” across its 41 member countries and that unexpected spending on refugees and migrants is pushing up demand for its loans.
“Thus programmes related to long-term integration of people with a migrant/refugee background are more important than ever,” the plan states. It also says it will address gender inequality and “mainstream” climate action across its activities and projects.

The bank, with assets of €25.6bn and loans of €13.7bn, wants to “enhance its visibility” and promote its knowhow, the plan adds.

Referring to the latest development, Wenzel said: “The CEB is the oldest development bank in Europe with an exclusively social mandate. Promoting social inclusion lies at the heart of the Bank’s activities and has done so for over 60 years. I am delighted, therefore, with the issuance of this first social inclusion bond today, which fosters the growth of the social bond market.”

The CEB has committed to publishing a social inclusion bond report a year after the issue, which will include a report from an independent auditor. Link