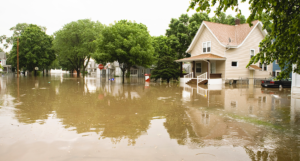 I am increasingly conscious of a yawning information gap between academia and investors when it comes to the implications of climate change. There is no shortage of research coming out which should be making the financial headlines, and yet largely goes unnoticed.

Professor Dirk Schoenmaker and Willem Schramade of Rotterdam School of Management suggest In Principles of Sustainable Finance: “The challenge for the transition of the financial sector is to change the dominant culture embedded in financial risk” because “people tend to think and work in separate silos.”

They made a survey of academic research over recent years, which whilst very familiar to the authors may come as a surprise to the financial sector. They point out that if we were to see a one-metre rise in sea levels later this century, then what are now once-in-a-hundred-years flooding events would instead happen every six months in New York, every month in Kolkata, and every single tide in Wellington, New Zealand.

Obviously, “there are knock-on effects on the housing stock and communities in coastal areas at risk. With increasing flooding risk, property insurance may retreat from coastal areas and/or premiums may become prohibitive.” With wonderful academic understatement, the pair observes: “Translating flooding risk to financial losses, Hallegate and colleagues (2013) …(estimate) global losses could approach $1trn or more per year.”

The implications of such research are indeed worrying for insurers, lenders and most especially investors in real estate. Or rather, they should be. And yet when I raise this point with senior leaders in the industry, I get blank looks.

In their recently published paper Climate Risk and Commercial Property Values the authors from Henley Business School et al found “Valuers are increasingly aware of heightened climate risk but are generally not explicitly incorporating it into market valuations.”

One of the authors, Steven Devaney, tells me: “We got a sense that investors were looking at physical climate risk, but did not feel ready yet to share their work. Significant knowledge gaps remain” with “many difficulties in estimating future asset values”. He suggests that “there is a parallel to how we talked about carbon 10 to 15 years ago. People are talking, but there's not much evidence of policies being implemented. We need more of a sense of purpose.”

According to Devaney “modelling is the key issue.” In particular “modelling is too much driven by historic experience” and an assumption “only places that used to be affected will still be affected, and affected in the same way.”

One of the main modellers, Will Robin, Head of Research at MSCI agrees: “There is a common misconception… that today's weather patterns will remain the same but worsen when in fact there could be very different changes. For example, certain areas prone to flooding may actually get drier in the future.”

The problem may also be that the industry is very much focussed on Net Zero targets, to the exclusion of a broader appreciation of climate risk. As Robson says: “Research so far has concentrated on how much carbon do you have to take out. We need to disaggregate the physical risks and Net Zero models.” MSCI sees solutions further out. “The next step will be to build models … that allow clients to input site specific data.” But he adds that “this is an area where many managers are currently struggling.”

They certainly are. Kristina Arsenievich, ESG Director at Barings complains to me: “We recently updated our model, but it does have to be based on what's available from vendors. The problem is there when you look at location, such a vital criterion…in most models the resolution is merely the nearest kilometre.”

Meanwhile, Simon Durkin Head of European Real Assets Research at Black Rock offers the observation that “too many investors at the moment simply think of physical fiscal risk in a binary manner – whether buildings are in a flood plain or not. We need to recognise that (other) extreme weather conditions can have effects.”

Andy Szyman of BMO Real Estate Partners agrees: “The limitations of modelling [were] demonstrated by the fact one of our central London properties recently experienced flooding despite desktop analysis suggesting negligible risk.” He is also seeking a broader approach “looking at a range of climate variables such as increased wind speeds, higher rainfall, and mean temperature rises”.

To try and get a handle on things, Christy Hill Head of US Asset Management of PGIM says “we invest in asset-level physical risk exposure screenings.” After all, they “are under $1,000 USD per asset (which) aligns with typical costs for thorough energy audits.”

Overview across the industry

For an overview across the industry, I spoke with Egbert Nijmeijer Co-Head of Real Assets at Kempen Capital Management. Working with German Insurance giant Munich Re, Kempen is modelling the effects of 19 different climate events on more than 200,000 different buildings. Kempen has completed its US analysis as it was keen to model its exposure to the Florida hotel market and hurricanes (Europe will follow). Worryingly, Kempen found that whereas at present a Category 3 Hurricane is likely to strike Florida every five years, having minimal effect, at a four degree rise in global temperatures, a Category Five would strike every year, causing significant damage.

Apart from Florida, Nijmeijer says one of the most interesting things to come out of the US research is “the very visible effect on real estate that will happen in the Sunbelt as it heats up tremendously.” Overall, under a three to four degree warming scenario a significant discount opens up between different cities. For example, the value differential between Austin and Boston rises to 17%. “Some real estate assets will simply be stranded because you cannot insure them. They will effectively be worth zero.”

That insurance point is interesting. Devaney found “mounting evidence of the losses borne by insurers from a combination of increasing frequency and intensity of extreme weather, and the relatively high value of assets exposed to hazards.” Yet he says there is little evidence this has affected “ insurance availability or pricing.”

Devaney suggests this is because insurers’ horizons are inevitably as short as their contracts – if they need to adjust premiums, they can always do that on renewal. “In contrast, it is the buyers of assets who are making a longer-term decision.”

So, what may bring about change? Devaney feels “if pressure is to come for investor action it will come from the regulators who regulate investment by pension funds and insurance companies to make sure that they are taking on board the long-term risk exposures we're talking about.”

After all, “it seems very surprising to me that people are not doing more now. Even in the most optimistic models, it is clear new areas will be at risk, and pricing should reflect this.” Quite.