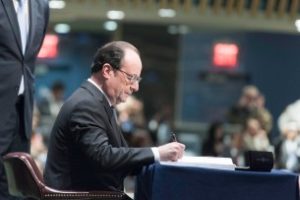 French President, François Hollande, signed off on the first two contracts of France’s version of social impact bonds – Le contrat à impact social (CIS) – at a ceremony in Paris yesterday (November 24). The CIS project was unveiled in March by Martine Pinville, Secretary of State in France’s Finance and Industry ministry. The format is very similar to social impact bonds where sponsors, usually governments, pay private investors a return for funding successful social projects that meet measurable outcomes.
Speaking at the signing, Michel Sapin, France’s Minister for the Economy, said the format of the CIS is that French charities/social providers make a proposal to private finance companies involved in the scheme who will provide the financial backing. These include organisations such as BNP Paribas, Mutual insurance group AG2R La Mondiale, Renault, and La Caisse des Dépôts, France’s sovereign wealth fund.
If the project is agreed, the state oversees the contract and independent experts evaluate the outcome/result of the CIS. If the outcome is positive over the agreed project lifetime then the government will pay back the principal and an agreed return on capital.
Sapin said: “This is a new pay for results initiative in areas of social innovation.“In a speech, Hollande said: “The private sector takes the financial risk here and gets involved in social provision, while public money pays for real delivery.” One of the two approved CIS projects goes to L’Association pour le Droit à l’Initiative Economique (Adie), a group that finances and helps entrepreneurs in rural zones and aims to create 320 jobs. BNP Paribas helped put together the financing, while KPMG, the auditor, will evaluate the project six and a half years after the project starts with the maximum principal amount for the contract set at €1.5m, including €195,000 of potential pay-out on successful results. The second goes to IMPACT Académie, which finances entrepreneurs in difficult social areas and has set out a 5-year programme to create shops in deprived areas where there are none. The project runs to December 31, 2021 and the total results payment could rise to a maximum €1m on meeting three conditions: 300 companies created, 1500 jobs created, and 400 trainees passed.
A further three CIS projects are expected to be signed shortly, and the call for projects to be submitted to the programme runs until January 30, 2017.
CIS project website: Link