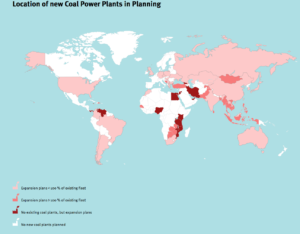 A new database reveals a ‘who’s who’ of the world’s largest coal plant developers and their expansion plans – information which has so far been hard to get for investors.

The database (coalexit.org) has been developed by environmental NGO Urgewald. Heffa Schuecking, director of Urgewald, explains it contains many companies not usually on the finance sector radar.

The divestment threshold applied by insurance company Allianz and the Norwegian Government Pension Fund refers to coal plant developers with revenue from coal higher than 30%.

But in practice, this only covers a third of the top coal plant developers; the remaining two thirds are either highly diversified companies or in other sectors like oil, according to the research.

Thresholds based on coal-based revenue or power generation thus “fail to capture many of the coal plant developers,” Schuecking says. It means that the new database will now allow a comprehensive divestment from these so far ‘hidden’ coal firms.

The research discloses also that the global coal plant pipeline and its financing is a gameplay of Eastern and Western nations. “Although the majority of coal plant developers are from Asia, international banks and investors from Europe, North America and Australia all play an important role in financing their dirty business,” says Schuecking, who was awarded the Goldman Environmental Prize in 1994.In portfolios of large institutional investors, top coal developers such as NTPC, KEPCO, Marubeni, Adani, and China Resources are commonly found, according to the database.

These plans of new coal power plants amount to 550,000 MW, expanding the world’s coal-fired power capacity by as much as 42.8%, the research says.

The impact of the new coal power plants is expected to be especially high since they are in ‘frontier’ countries, nations that have so far not made use of such plants, or did so barely. By installing the coal plants in such countries for the first time, new coal infrastructure will be set up, creating the kind of coal-dependencies from which developed nations are today suffering when seeking to transition to a low-carbon future.

The research showed that new coal plants are in the pipeline in 14 such countries with no history of coal-fired capacity, e.g.: Egypt, Pakistan, and Bangladesh.

Lidy Nacpil, coordinator of the Asian People’s Movement on Debt and Development (APMDD), says: “In most of these countries, there is massive public resistance to these plans,” urging banks and investors to blacklist companies constructing a “destructive cycle of coal dependency”.

The world’s largest coal plant developers are owned by nations like India, China, Japan and South Korea, which have all signed up to the Paris Climate Agreement.

The database can be found on coalexit.org from tomorrow.