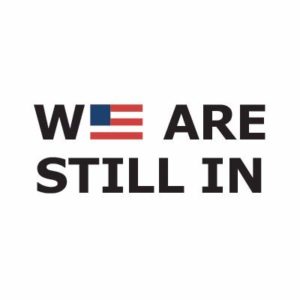 “Well get there anyway.” The words of Ceres’ CEO Mindy Lubber of COP21’s climate targets, adding that the lack of leadership at the federal level has in fact spurred additional activity from investors and corporations.
One year on from Trump’s ill-advised exit from the Paris Accord, it seems it might have been a good thing, making Federal inaction not only irrelevant to the global and national movement, but a spur to it. “I don’t want to diminish the harm from pulling out, but we will get there anyway,” she said.
But Lubber also cautioned that the lack of public policy was going to be an obstacle even so. “That said, it is one thing to see 1,000 major institutions moving forward, but without public policy or a regulatory system, it’s going to be very hard to move the next 6,000, or the next 600,000 beyond that. We are making progress, we haven’t seen timidity on the part of the private sector, we’ve seen assertive, bold action, but we are going to have to keep pushing.”
At the same time, she said, the possibility of a plan is taking shape because of the level of involvement. “With the kind of movement we are seeing even beyond the corporate sector, States, municipalities, towns and cities, and investors, I’m talking about the healthcare sector and the education sector, we are getting closer to designing a plan that will get us to the requirements we need to meet, at the country level, for the Paris agreement. I don’t think it’s impossible, I think it’s doable because of the energy and enthusiasm and bold steps that have been taken.”
Lubber then listed a whole series of corporate and investor initiatives. “This action is hard to ignore,” she said. “If you just look at the last two years, commercial banks, Bank of America, Citigroup, J.P. Morgan, Wells Fargo, each invested, collectively, $850 billion in clean energy.” She told the story of her interview at the Ceres conference two weeks ago, with Citigroup’s President James Forese, who interrupted her to make sure the audience did not miss the fact that “we are still in” and that the bank was making sure it did what it takes to get to the Paris goals. Indeed, the We Are Still In coalition is a reality. “Target announced climate goals based on science-based targets, and 100% renewables. Apple is 100% clean energy for all their operations. Lyft has announced that it was going to get carbon credits for every single ride it gave. L’Oreal USA plans to achieve carbon neutrality in 2019 for 21 of their manufacturing and distribution facilities.”
Moving on to investor initiatives, she noted additional investment by New York State, with another $2 billion in their low carbon equity index, making a total of $7 billion invested in sustainable investments. She pointed to the divestment plan of the New York City Comptroller. “All this is helping us get to where we need to go,” she said. “CalSTRS committed $2.5 billion dollars in 2016 to a low carbon index and a sustainable investment program. CalPERS announced it would acquire an 80% stake in wind farms in Kansas and Oklahoma for $233 million; and, earlier in the year, put several hundred million dollars into solar.”
She said that of the 123 global companies supporting science-based targets, 24 are in the US. But she also noted setbacks. “We stood with General Motors and Ford while they signed the CAFE standards to increase fuel efficiency from 27 to 54 miles per gallon, and now their trade association, the Auto Alliance, and the current administration are doing everything they can to roll back those commitments.”
And she pointed to the recalcitrance of the fossil fuel industry: “Although the fossil fuel industry is making some investments into renewables, they are not changing rapidly enough. If we are going to get to what the Paris Agreement demands of us, the fossil fuel sector is going to have to radically change, as will the transportation sector.”In the earliest days of the current administration, I wrote about corporate America coming to the rescue of climate action, though few were willing to make a public statement about it at the time. At the one-year mark, the response from corporations has again been thin, despite regular announcements of the initiatives they are undertaking to meet the Paris goals. It seems that many are chary of even appearing to criticise the current administration, perhaps because of the risk of a twitter storm. Of the many companies that have clearly supported the Paris Accord, Apple, Intel and Morgan Stanley, among others, did not respond to requests for statements. But two did – Johnson Controls and The Hartford. A spokesperson for The Hartford said: “The Hartford remains committed to environmental stewardship and continues to make progress toward its goals. The company was recently recognized with two 2018 Climate Leadership Awards, one for excellence in reducing greenhouse gas (GHG) emissions and another for setting goals to continue decreasing emissions. In 2016, we accomplished our goal of reducing GHG by 20% – two years earlier than anticipated. The Hartford’s new goal is to further reduce emissions by at least 2.1% annually, resulting in a minimum decrease of 25.7% by 2027 and 46.2% by 2037, using 2015 as the base year.”
And a statement from Johnson Controls said: “Johnson Controls remains committed to the coalition that is working with city, state, university and private sector partners to meet the Paris agreement targets.”

On the day Trump pulled out, we also reproduced a series of statements criticising the move from a whole raft of investors and climate action groups. Two of these updated their stances. Beth Richtman the new Managing Investment Director of Sustainable Investments at CalPERS, said: “CalPERS actively supported the forging of the Paris Agreement, and we remain committed to seeing its goals implemented in order to limit the global temperature increase to well-below 2 degrees Celsius. Regardless of what the US policy is, the physical impacts of climate change and the transition to a low carbon economy are very real investment issues that need to be considered for CalPERS as a global investor. Last year, CalPERS utilized the carbon footprinting of our own global equity portfolio to launch an unprecedented and targeted partnership for global corporate engagement, Climate Action 100+. We expect constructive corporate action to come from this important global, 5-year collaboration.

“Through this initiative, CalPERS and the $30 trillion worth of investors behind the initiative will engage with companies to find solutions that align the companies’ business strategies with the Paris Agreement’s goals and help these companies thrive in a low carbon future. We need to make money for our beneficiaries over the long-term, and are pushing for a future where not only do the companies of Climate Action 100+ thrive, but greenhouse gas emissions globally are limited such that they do not imperil other parts of our portfolio through the risks climate change brings. In addition to our corporate engagement work, CalPERS has continued to invest in financially attractive, renewable energy projects and ways to reduce the energy use of our real estate holdings. We’re still in.”
And CalSTRS CEO, Jack Ehnes, said: “Despite President Trump’s withdrawal one year ago, CalSTRS has kept true to our commitment to support the tenets of the Paris agreement. We are integrating the Task Force on Climate-Related Financial Disclosures’ recommendations into our climate-related reporting and corporate engagement efforts. We continue to vote for shareholder proposals requiring increased reporting on climate change risks, writing letters to regulatory bodies and collaborating with like-minded organizations to affect change. As a large investor with a focus on the long-term, CalSTRS views its leadership role on climate risk mitigation as essential to the health of the economy and the health of our retirement fund.”
It’s not so much that we are still in, it looks like we never left.