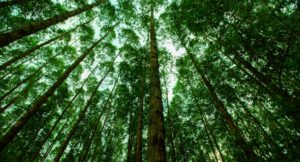 An Investor Guide To Negative Emission Technologies And The Importance Of Land Use, concludes that a new industry may emerge that values carbon stored in vegetation and soil, unlocking new business models and investment opportunities for avoided deforestation, reforestation, afforestation and land restoration. Nature-based solutions, it says, (NBS) could generate $800bn in annual revenues by 2050, worth a market capitalisation of over $1.2trn today, surpassing that of the oil and gas majors, it says.

Fiona Reynolds, CEO of the PRI said: “We can’t achieve net zero without nature-based solutions. The pandemic has supercharged the investment case, especially in forestry, and this new analysis shows the magnitude of the opportunity.” Previously, when it came to removing emissions, the role of land-use remained a blind spot, often missed in climate scenarios that focused on energy only; however, along with the pandemic, as net zero targets become widespread, there is a growing pressure to channel capital into achieving them. This in turn is driving demand for NBS carbon credits. From 2017 to 2018, the value of forestry and land-use-related credits traded in the voluntary offset market tripled to $172m.

Reynolds added: “policy and business momentum have now advanced to a critical mass for forests to begin emerging as a new asset class. Investors can act now to unlock investment opportunities and to take an increasingly leading role in financing.”

For investors to capitalise on this, the report suggests several emerging finance mechanisms; in particular, the use of distressed assets. This is where investors purchase and restore deforested or degraded public and private land to benefit from the carbon stock it produces, with the potential to sell the land on to other investors or to the government for conservation purposes. It also suggests other mechanisms including stewardship models, carbon farming agreements, sustainable farming, green bonds, forest insurance provision, and carbon off-taker guarantees.

Another element that must be considered by investors alongside afforestation is the prevention of deforestation.

This, the report says, will present additional opportunities as measuring, reporting, and verification mechanisms and compensation schemes reach scale.

Investors also have the opportunity to support the forestry market’s institutional development by engaging with policymakers and companies to commit to climate action, invest in NBS and ensure deforestation free supply chains.

“policy and business momentum have now advanced to a critical mass for forests to begin emerging as a new asset class. Investors can act now to unlock investment opportunities and to take an increasingly leading role in financing.”

However, the report says there are barriers that have the potential to disrupt progress; firstly, reputational risks may dampen investor enthusiasm unless laws are vigorously enforced or tightened to end deforestation. Additionally, Thomas Kansy from Vivid Economics, the company behind the research, explained: “The voluntary carbon markets are still in a bit of an adventurous phase. And so there is a bit of uncertainty in general for the market.” However, he pointed to Mark Carney’s Taskforce on Scaling Voluntary Carbon Markets as an element in solving this lack of capital market instruments.

Finally, although the report highlights that technical solutions, such as Direct Air Carbon Capture, Use and Storage (DACCS) and bioenergy with CCS (BECCS), could generate an additional annual revenue of $625bn by 2050, it warns that an overreliance on bioenergy could have terrible consequences for the planet, biodiversity, and food security.

The report is part of the PRI’s Inevitable Policy Response programme (IPR), which was launched last year and aims to prepare financial markets for climate-related policy risks that are likely to emerge in the short and medium term. For Kansy, the IPR is one of “the few scenarios out there that considers land use; many of the other scenarios claim to be Paris Agreement compatible or 1.5 degree compatible, but they assume a lot of negative emission technologies coming in. And because there's so much uncertainty, most of them just basically say “there will be significant bioenergy with CCS”, and we just think that levels assumed are unsustainable given other constraints on land.”

However, when RI reported on the International Energy Agency’s latest long-term climate scenario publication, issues with the IPR were flagged. Ingrid Holmes, Head of International Policy and Advocacy at Federated Hermes, told RI: “As much as we might like some of the alternative scenarios now available,” referring to the PRI’s Inevitable Policy Response and scenarios from the Intergovernmental Panel on Climate Change, “there is no means to practically integrate them into how we look at investment risk from a top down perspective or think about investment risk from the bottom up”

Separately, in a recent blog post, Fiona Reynolds announced that the PRI is preparing to launch the next three three-year strategy for its ten-year Blueprint for responsible investment. The current draft, which is under signatory consultation until 25 November 2020, focuses on building a bridge between financial risk and real-world outcomes. Within this, it touches on eight core areas, including: helping investors drive real-world outcomes, which are in line with the Sustainable Development Goals, achieving net-zero commitments from investors, businesses, and governments, and elevating social issues on the agenda – already the PRI has published a human rights framework for institutional investors.

Moving forward with the negative emissions technologies research, Vivid Economics will conduct more research to create a revised version planned for early next year of the PRI’s Inevitable Policy response, taking into account new policy forecasts and targets, and COVID-19.

Kansy concluded: “It’s really about how investors can play a facilitating role in this. So there's a bit of turbulence in this market at the moment, until we define it, and I think the investors’ role is really needed for this, because at the moment there’s lots of people in this carbon supply chain, but for it to grow what’s really needed is people who can provide the finance.”