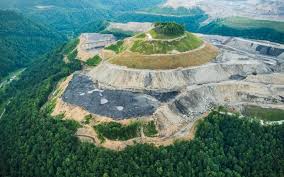 Deutsche Bank is ceasing its financing of mountaintop coal removal (MTR), saying it isn’t a “legitimate or ecologically sensible” practice.

Mountaintop removal is defined as a surface mining method that involves the removal of mountain tops to expose coal seams and the disposal of the associated mining overburden into adjacent valleys. Deutsche and other leading banks have been under pressure from campaign groups to cease funding the process.

Despite being an “established and regulated” mining method, the bank says it continues to be subject to political, judicial and regulatory scrutiny; its view is that MTR is likely be phased out in the near to medium term.

So the bank and its subsidiaries have begun to phase out the provision of credit or the underwriting of debt/equity to mining companies which use MTR as an extraction method, and which make a material contribution to the total annual MTR coal production in the US.

“’Using explosives to destroy the summits of mountains – does not seem to us to be a legitimate or ecologically sensible manner of surface mining,” said co-CEO Jürgen Fitschen at the bank’s AGM last week.

“For that reason, we will no longer finance companies who are significantly involved in this type of coal extraction.”The move was welcomed by campaign groups. “This is a real break-through as Deutsche Bank has played a major role in financing companies like Blackhawk Mining, the world’s largest producer of mountaintop removal coal,” said Heffa Schuecking, director of the German environment and human rights NGO urgewald.

“This is a real break-through” – campaign group

But Fitschen warned against false expectations, saying the bank will “certainly continue to see some issues differently from many climate protection or human rights organisations”.

“But we do not do so lightly. We take our responsibility seriously. We listen carefully to their objections, even if we don’t share them. If we do a piece of business despite these objections, we need to be able to justify it.”

It comes amid an updated environmental and social policy framework from the bank. Its funds arm Deutsche Asset Management has its own policies.
Deutsche says it recognises the risks of climate change and is committed to support the transition to a low-carbon climate-resilience economy. It views nuclear power as an important low carbon energy source.