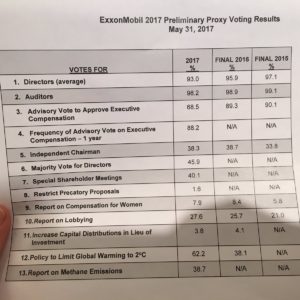 An unprecedented 62.3% of shareholders backed the climate change resolution at ExxonMobil yesterday filed by the Church Commissioners for England and New York State Comptroller Thomas DiNapoli, who called it “an unprecedented victory for investors in the fight to ensure a smooth transition to a low carbon economy”. Sister Pat Daly of the Tri-State Coalition for Responsible Investment hailed it as a “landmark win for ICCR members and all concerned shareholders”. It follows recent majority votes at Occidental Petroleum and PPL Corporation.

Here we publish remarks made at the AGM on behalf of the investors by Edward Mason, Head of Responsible Investment for the Church Commissioners:

Chairman, members of the board, good morning, my name is Edward Mason from the Church Commissioners for England who manage the Church of England’s endowment.

38% of shareholders voted FOR the proposal.

I did not expect to be here again this year, presenting the same proposal, this time filed by investors with five trillion dollars of assets under management.

Since last year’s vote, we have engaged with ExxonMobil executives, alongside other institutional investors. We have sought to reach agreement on the enhanced climate-related disclosure that shareholders called for.

The corporation’s executives would not agree to additional meaningful disclosure.

Shareholder requests to meet with non-executive directors have continued to be rebuffed.Members of the board, in your other roles you have made clear that you recognise the significance of the agreed international goals on climate change.

Mr Frazier, as Chairman and Chief Executive of Merck & Co, you back a climate change position statement which says: “Merck supports science-based international and national actions to address the challenges presented by climate change.”

Mr Weldon, as Chairman and Chief Executive of Johnson & Johnson, you advocated a cap and trade system to drive greenhouse gas emissions reductions.

Dr Avery, you are an atmospheric scientist. The Financial Times reported you telling a conference in 2014: “Clearly climate science is telling us get off fossil fuels as much as possible”.

Members of the board, do you leave your understanding of climate change at the door when you attend ExxonMobil board meetings?

ExxonMobil said in its 2014 climate risk report to shareholders that 2 degrees is not a scenario worth considering. In this year’s proxy materials you have stood by this report.

You do not agree with this contention.

The governments of the world who have signed and ratified the Paris Agreement do not agree.

The Financial Stability Board doesn’t agree.

And most importantly, and why I am here today, shareholders don’t agree.

It is the fiduciary duty of investors to ask for assurance of ExxonMobil’s management of the risks and opportunities presented by the transition to a low carbon economy.

It is your fiduciary duty as directors to provide it.