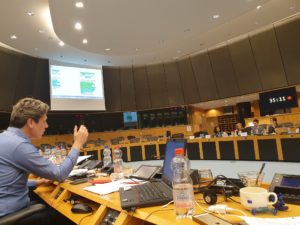 The top European Union policy bodies have given the green light to low-carbon benchmarking regulation, marking the first legislative agreement under the Action Plan on sustainable finance.

Last night, the member state-level European Council and the European Parliament reached a preliminary agreement on how the EU should approach green indices – notably approving rules that would force all benchmark providers to report on ESG for their mainstream products as well as dedicated sustainability ones.

The agreement was reached relatively quickly, after just four “trilogue” meetings, and has proved a significant victory for the European Parliament, flying in the face of widespread concerns about the work of the High Level Expert Group on Sustainable Finance (HLEG) being ‘watered down’ through the EU negotiation process.

The trilogue is a closed-door EU procedure where the political players finalise decisions.

The European Council and Parliament had to form their official positions on the Commission’s proposal ahead of the trilogue negotiations. The Council came out largely in favour of the proposal, but Parliament told RI at the time that the plans needed a ‘complete overhaul’ and stepped-up ambitions, reflecting more closely the HLEG’s original recommendations.Late last year, Parliament confirmed that key changes it was proposing included changing the names of the new index categories from ‘low carbon’ and ‘positive impact’ to ‘transition’ and ‘Paris-aligned’. It also insisted that all benchmarks should require disclosure on ESG and climate alignment, not just niche products.

Despite the seeming opposition between Parliament’s proposals and the less ambitious positions taken by the Council and Commission, last night’s result saw the former triumphant, with the accepted proposal closely mirroring its amended version.

In a statement, the Council described the two new product categories it approved – the Parliament’s ‘EU climate transition’ and ‘EU Paris-aligned’ ones – as a “harmonised, reliable tool to pursue low-carbon investment strategies”.

It also welcomed “an obligation for all benchmarks or families of benchmarks to provide an explanation of how ESG factors are reflected in their investment strategy, as well as how the methodology aligns with the target of reducing carbon emissions”.

There will be a transition period until the end of 2021 to enable the market to align, according to the current agreement.

The agreement is preliminary because it has yet to be formally endorsed by Parliament and Council, but insiders say it is highly unlikely to face any pushback at this stage.

Low carbon benchmarks in the EU is one of the plenary sessions at the:
RI Europe conference, London, 11-12 June, 2019.