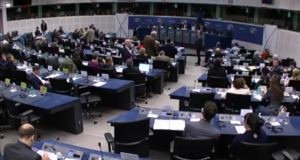 The European Parliament has voted through a major set of changes to the benchmarking landscape in the EU, in its latest bid to promote sustainable finance.

Compromise amendments developed by the Parliament’s Economic and Monetary Affairs (ECON) Committee were approved in a vote yesterday and see the regulatory categories originally proposed by the European Commission redesigned to more closely link them to the Paris Agreement, and include disclosure and scenario analysis.

Earlier this year, the Commission called for the creation of two new regulatory product categories to reduce what it described as a growing level of ‘greenwash’ around carbon-focused benchmarks. The categories it wanted were ‘low-carbon’ and ‘positive carbon impact’.

Overseen by ‘rapporteur’ Neena Gill, these two buckets have been overhauled in the latest stage of law-making, and would now function to kick-start the provision of benchmarks offering investors products that support companies transitioning to a low-carbon economy, or those already aligned with Paris.

The two new categories, reported by RI earlier this month, are ‘transition’ and ‘Paris aligned’, and were both approved by ECON as part of the vote.

The proposals state that eligible ‘transition’ indices must comprise companies that meet three requirements: they must have measurable, time-based climate targets consistent with the Paris Agreement; have in place a detailed emission-reduction plan, down to the level of subsidiaries; and must report annually on progress.

The creation of transition benchmarks and Paris Aligned benchmarks would mean providers would have to undertake company-level scenario analysis – a topic expected to be one of the biggest challenges for investors in 2019 and beyond – to be able to disclose which temperature trajectory their benchmark is aligned with.

There are already some mechanisms through which this kind of information can be gathered – the Science Based Targets Initiative includes 500 companies with voluntary commitments to align with Paris, and the PRI and 2° Investing Initiative have a database focused on scenario analysis for corporate bonds and public equities – but no indices currently exist that would meet the category requirements being proposed.

Earlier this week, index giant MSCI’s research arm launched a Low Carbon Transition Score product and, in July, fellow heavyweight S&P Dow Jones Indices created a forward-looking family of Carbon Price Risk Adjusted Indices.RI understands that at least one of the major providers is working on a benchmark eligible under the current ‘transition’ proposals, although neither S&PDJI, MSCI nor FTSE responded to a request for comment at the time of publication.

Another compromise amendment to make it through at yesterday’s vote is that all indices have to disclose in their Benchmark Statement whether they take ESG into account. They won’t have to explain how, or what impact their products have; however, a separate part of the approved proposals requires all providers to disclose the climate impact of their products in less weighty documentation, such as on their website.

“The Parliament is accompanying the market on this, rather than following it”

Rapporteur Gill’s call for all benchmarks to be Paris-aligned by 2022 didn’t make the cut, but a clause was passed that would require the European Commission to review whether they can broaden the disclosure requirements to all benchmarks. That review would take place in 2020/21.

“The compromise amendments are less ambitious that what was being proposed by Neena Gill, but still way more ambitious than the Commission’s proposal,” observed Sebastien Godinot, an Economist at WWF’s European Policy Office.

“Some of the other disclosure proposals coming through on sustainability are stronger because they relate to mainstream players, while here the mandatory disclosure for mainstream providers will not be systematically in the benchmark statements. But at the same time, significant equity and bond benchmarks are covered, and the review clause means there’s an opportunity in the near-term to re-discuss this.”

He continued that there is investor demand for passive transition products, from both within the EU and beyond.

“It’s really interesting that the Parliament is accompanying the market on this, rather than following it, and that should help it move into the mainstream. What we hope is that now the Council and the Commission will support them.”

Having been passed at ECON, the benchmarking proposal will now skip a vote at Plenary and go straight through to the ‘trilogue’ process – negotiations between the member state-level Council, the Parliament and Commission, the EU executive – with a view to concluding before the end of the current college in the spring.