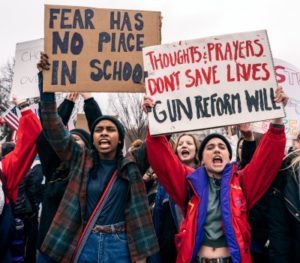 We have reached a point, following the latest mass school shooting in Parkland, Florida, where investors can say that it is their fiduciary duty to retain holdings in the shares of gun manufacturers and it is their fiduciary duty to divest them. Not the same investor, of course, different ones.
Defined as the legal duty of a fiduciary to act in the best interests of the beneficiary, the argument over its practical application becomes: what are the best interests? Making money for your beneficiaries out of gun stocks and the shares of the outlets that sell them, divesting from them because they are wrong, or divesting from them to avoid future financial risk if gun legislation is enacted in the US? This last, which once seemed to me about as unlikely as anything I could think of, now seems a real possibility.
As scores of US corporations break their ties with the National Rifle Association; as there are calls for major credit card companies to follow the example of PayPal and Square and not allow their products to be used to buy firearms; as three of the major gun retailers, including WalMart, announce that they will raise the age limit to purchase guns to 21; as Morningstar and US SIF publish reports to help investors find out if they are invested in gun stocks; and as even some US politicians say that something must be done… there appears to be a change in attitudes.

As for shareholder resolutions on gun safety, there is one, so far