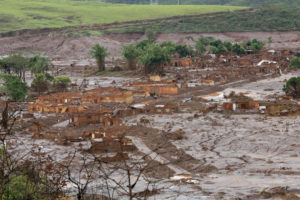 Brazilian Mauro Marcos de Silva, whose district Bento Rodrigues was totally destroyed when the Fundāo dam collapsed in 2015, has one message for investors in its co-owner BHP Billiton. “How can they sleep at night knowing their money has been invested in a crime and in blood? People were killed and they helped fund these social and environmental violations.”

Last month, three years to the date of the worst environmental disaster in Brazil, affected communities travelled to London to challenge its BHP Billiton and their shareholders over full reparation.

The tsunami of dirty mud filled with mining waste that breached Fundāo dam killed 19 people initially and affected more than 1.2m people on different levels, according to survivors.

De Silva, who comes from a 307-year-old community founded by resisting African slaves, says they used to be healthy but now fill hospitals or cemeteries.

Fellow community member Mõnica Santos says when the disaster struck there was no warning. “We had ten minutes to run away from the tsunami of mud. There were young, the elderly, on there own. In the end five people died from my community. But that is really a miracle. We were lucky.”

Many lost their livelihood, homes or food and water supply when 60m cubic metres of iron ore waste – enough to fill 25,000 Olympic-size swimming pools – engulfed districts and contaminated the Rio Doce (Sweet River) causing enormous ecological damage. Three districts were completely destroyed and people affected are still living in temporary homes. Their houses will be built in other areas, a cause of much discontent.

Fundāo dam was run by Samarco, a joint venture between Brazilian mining giant Vale and Anglo-Australian multinational BHP Billiton. They reportedly face tens of billions of dollars in clean-up and compensation costs. As part of this, both mining companies and Brazilian government agencies created the Renova Foundation in 2016 to process compensation to areas and communities affected.

But community leaders say the Renova Foundation acts more in the interest of the mining companies. They also say its methods of assessing claims do not reflect the reality of life in the communities. For example in the fishing community of Espìrito Santo, that lost its livelihood, female workers are less formally recognised as fishing professionals.

Simião Barbosa, a fisher and community leader, says: “They only want to help those who have a fishing ID. But when the mud came, it did not only come for the documented ones. It came for everyone.”

In a statement to RI, the Renova Foundation says it respects human rights of all persons in its programmes, projects and actions. “Therefore, there is no payment of lesser indemnity to workers who performed the same job as men and/or earned the same income. The Foundation emphasises that there is no need to talk about gender discrimination in its actions.” *[Please see Renova’s home page here*The Renova Foundation is also criticised for spending millions of Reais on advertising and publicity about their work. The Foundation says paid media is only for reporting on the repair process or providing public services.

On its relationship with mining companies, the Renova Foundation says it is an autonomous organisation, established in ‘The Term of Transaction and Adjustment of Conduct’, signed by Samarco, Vale, BHP Billiton and governments of Minas Gerais and Espírito Santo.

Joeci Benedita Santo Lopes Miranda, from Espìrito Santo, says: “I would like investors to visit us and see with their own eyes to have a different perspective. Because the Renova Foundation comes here to London and they show these beautiful pictures and adverts when it is not the truth of what is happening on the ground.

“Investors should know more about the companies they are investing in. The levels of people that are dying because of the disaster (many allege the toxic waste has contributed to health issues in communities) which they consider a crime, are very high, and they should know about it.”

The eight community leaders had meetings with the Church of England Pensions Board, the Local Authority Pension Fund Forum, proxy services provider PIRC and ESG research firm GES. And they met with members of the UK parliament.

The representative from BHP Billiton was ‘as cold as the weather in London’, according to Romeu Geraldo, from Paracatu de Baixo, but she agreed to a further meeting in Brazil.

Just days after their trip, the Corporate Human Rights Benchmark (CHRB) launched in London with BHP Billiton ranked as one of the top five scoring companies overall.

The CHRB scores companies across six themes, including on performance on responses to serious allegations, and on remedies and grievance mechanisms.

BHP Billiton scores in the top three for the latter compared with its peer group of extractives. Vale also scores highly, being top three overall in the extractives category, alongside BHP Billiton and Rio Tinto.

The CHRB methodology was developed through multi-stakeholder consultations and is led by Peter Webster, CEO of the EIRIS Foundation and Margaret Wachenfield, managing director of consultancy Themis Research.

Webster was challenged on the Fundāo dam disaster at the London launch. He said its methodology looked at how companies were dealing with grievances and whether they had engaged with victims. But they weren’t scored on how happy victims were with the outcomes.

He conceded the benchmark may need to evolve if allegations remained against a company over time.

CHRB backer the Business and Human Rights Resource Centre, which is also supporting affected Brazilian communities of the dam disaster, says it is a difficult issue.
It says the CHRB did look at the allegations around the Fundāo dam disaster and due to the growing complexity of the case, involving civil cases and shareholder legal action against BHP Billiton, it is likely it will revisit the issue.

Going forward, the affected communities hope BHP Billiton, Vale and their investors will engage with them further.

Douglas Bezerra Adilson, an indigenous leader for the Krenak people, who he says have been fighting ‘capitalist exploitation’ for 200 years, considers the mining companies a continuation of this history of violation.Adilson says the context is different from the period of Portuguese colonisation in the 19th century, when “fair wars” were declared on the Krenak people for “preventing the development of the country”; but the practices are the same.

The ecological damage to Doce river, which the Krenak people say is now poisoned, has been a blow to the community. Not only was it a vital source of income, food and water, but also a place of spiritual practice.

“These companies do not have policies that really consider sustainability,” says Adilson. “They don’t know who the affected communities are and their policies are not impacting on us well. We hope together we can approach it in a different way to develop a true sustainability policy.”