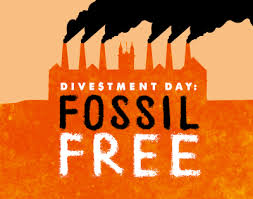 California pension giants CalPERS and CalSTRS released a joint statement stressing the “importance of corporate engagement on climate change” where both said while the issue posed risks within their investment policies, active and direct engagement as a first line approach is the best way to resolve issues, rather than divestment which severs their influence. They said: “We firmly believe that engagement is the first call of action, and results show that it is the most effective form of communicating concerns with the companies we own.” The funds are under pressure from California senate leader Kevin de Leon to exit coal investments.

The Carbon Tracker Initiative, the financial think-tank, said Global Divestment Day was a “wake-up call for energy companies to stop burying their heads in the sand”. “We are not going to stop using fossil fuels overnight, but capital needs to be invested in line with a reduction in demand, rather than assuming business as usual scenarios. Investors should engage with companies to ensure capital isn’t wasted on high-cost unburnable carbon, which won’t provide good returns in the future,” said Research Director James Leaton. Carbon Tracker’s CEO Anthony Hobley added the campaign was asking “valid questions” about how funds manage climate risk. The answer won’t be divestment for many pension funds – and if that’s the case, they need to have a good answer about how their investments are maximizing the opportunities arising from the energy transition, rather than just following the decline of the coal sector.”

At Harvard University, more than 30 students from the Divest Harvard campaign occupied Massachusetts Hall, home to the office of University President Drew Faust demanding that the Ivy League university divest its $35.9bn endowment from fossil fuels. The Harvard Crimson reported that police were called on Thursday morning. As at the time of writing the sit-in was ongoing.

In London, a group of campaigners protested against Church of England investments in fossil fuels during the General Synod yesterday. The group, from Christian Climate Action (CCA,) were highlighting how Church Commissioners’ funds are invested in energy companies such as Shell and BP. Campaigners will “flood” London’s City Hall, home of Mayor Boris Johnson and the London Assembly, tomorrow (February 14).

Next month, the UN-backed Principles for Responsible Investment (PRI) is holding a debate on fossil fuel engagement/divestment in New York. The keynote speaker is PRI Board Chair Martin Skancke, the former Norwegian finance ministry official who headed a review of the country’s sovereign fund’s fossil investments. It will be moderated by PRI Managing Director Fiona Reynolds and speakers include Geeta Aiyer (Boston Common Asset Management), Priya Mathur (CalPERS), Colin Melvin (Hermes EOS), Niels Erik Petersen (Unipension) and David Russell (USS).The New Zealand Superannuation Fund faced a call from the Green Party to divest from fossil fuels, starting immediately with coal. It was accompanied with a new report, Making money from a climate catastrophe: The case for divesting from fossil fuels, which pulls together a significant number of resources to make the ethical and financial case for divesting from companies directly involved in the mining and production of coal, oil, and gas. The Fund currently has NZ$676m in fossil fuel companies, the Greens said.

New York University’s faculty called for fossil fuel divestment via a letter to President John Sexton: “We call on NYU to freeze any new investment in and to divest NYU’s endowment from fossil fuel companies.”

In Vermont, the Senate Government Operations Committee is drafting a bill (S.28) that would require the $4bn Vermont Pension Investment Committee to divest retirement holdings from the world’s 200 largest publicly traded fossil fuel companies by 2020. There is a similar bill in the House and a resolution, according to local news organisation VT Digger. State Treasurer Beth Pearce opposes the divestment proposals, preferring constructive engagement via the Investor Network on Climate Risk, the report added. But Eric Becker, chief investment officer at SRI firm Clean Yield Asset Management, was quoted saying shareholder engagement with oil firms was a “woefully inadequate tool.”

Fossil Free Indexes released a report listing the world’s top 200 public companies ranked by the carbon content of their fossil fuel reserves. The top five ranked oil and gas companies – Gazprom, Rosneft, PetroChina, ExxonMobil and Lukoil – account for over 50% of overall oil and gas list emissions and much of the emissions growth.

In Canada, the University of Calgary said it would not alter its investment policy. “At this time, the University of Calgary is not looking at making changes to our current investments in the energy industry,” said President and Vice-Chancellor Dr. Elizabeth Cannon in a statement quoted by the Financial Post. She added: “We have responsible fund managers who invest the university’s C$710m endowment in a balanced portfolio, including approximately $40 million invested in the energy industry.” The report added that some 30 Canadian universities are reportedly mulling divestment of their endowment funds from coal, oil and gas companies. This week, the University of British Columbia’s faculty voted 62% in favour of urging the board to exit fossil fuel holdings within five years.

The United Nations Framework Convention on Climate Change (UNFCCC), the body headed by Executive Secretary Christiana Figueres, is marking the day on its UN Climate Change News Room page on its website. Last year UN Secretary General Ban Ki-moon said: “I have been urging companies like pension funds or insurance companies to reduce their investments in coal and a fossil-fuel based economy to move to renewable sources of energy.”