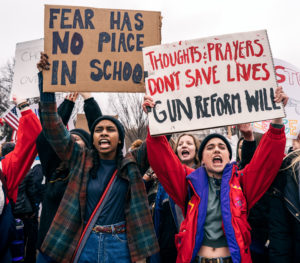 The corporate/investor reaction to gun violence in the US continues to rumble on, even as news of another mass shooting emerges. The latest development came a little less than a month after Bank of America Vice Chairman Anne Finucane announced in a Bloomberg TV interview that: “It’s our intention not to finance these military-style firearms for civilian use.” A Reuters report announced that the bank was part of a credit facility set up to facilitate a bankruptcy exit by gun maker Remington. Finucane subsequently sent a letter clarifying the bank’s position. The letter said: “that we would be engaging those limited number of current clients that we have that do indeed manufacture these firearms for non-military use. Unless it was their intent to cease such manufacture, we would exit our relationship with them in an orderly and legal manner.” The letter goes on to suggest that the relationship may be terminated as soon as Remington emerges from its Chapter 11 bankruptcy proceedings.
And reactions will continue to rumble. Following the almost 70% shareholder support at Sturm, Ruger & Company for a resolution calling for a report on activities related to gun safety measures and the mitigation of harm associated with gun products, the Interfaith Centre on Corporate Responsibility must be feeling confident about taking the proposal to American Outdoor Brands in September. The report will include “evidence of monitoring of violent events associated with products produced by the company”, evidence and progress in research to produce safer guns, and an “assessment of the corporate reputational and financial risks related to gun violence”.
These two resolutions at gun manufacturers were not the only ones filed, but they were the only two to reach a vote. A resolution at Dick’s Sporting Goods was filed by Mercy Investments asking for a report on what actions it had taken to curb gun violence, but it was withdrawn when the retailer agreed to stop selling assault weapons and raise the minimum age to buy a long gun in response to the Parkland shootings.
There was also a resolution at insurance company Chubb, which offered a special NRA insurance policy called CarryGuard that would cover the insured if they shot someone in self-defense. This resolution wasn’t withdrawn.
Instead, Chubb filed a successful no-action appeal invoking the ordinary business argument. It raised SEC Staff Legal Bulletin 14I, alleging micromanagement over something that was not a significant issue, while at the same time arguing that the board committee met and considered the issue of firearms insurance and the fact that investors hadn’t raised the issue in meetings.The SEC ignored those arguments, but allowed the company to exclude the proposal because the proponent did not provide sufficient proof of stock ownership. Then Chubb dropped the product line anyway, following the February Parkland shootings.
In addition to facing shareholder resolutions, both Sturm Ruger and American Outdoor have answered – in print – the questions that BlackRock publicly indicated they would be asking them during engagement. There is no confirmation that direct engagement has taken place, but BlackRock, which, along with Fidelity, is the biggest investor in both companies, has been given ‘answers’. American Outdoors’ response relies heavily on the fact that it already complies with the hundreds of current laws at the federal, state and local level; only sells its products to federally-licensed retailers; and can report to whom it sold any weapon – sometimes as far back as 1895 – at the request of the Bureau of Alcohol, Tobacco, Firearms and Explosives. It also states that if the laws that were already in place were effectively enforced, then they would achieve most of the aims of gun law reformers, including fixing the FBI’s National Criminal Instant Background Check System so that states report problems to the FBI effectively. In addition, it runs a number of safety programmes with the National Shooting Sports Foundation. Where it lost me was in its concerns about being required to implement ‘smart gun’ technology: “what happens when the battery dies or other elements of the technology fail. A person relying on a firearm to protect his or her life, or the life of a loved one, does not have the liberty of rebooting the device, recharging the battery, removing a glove, or drying his or her hands.” But, in the main, BlackRock’s questions are answered.
The Sturm Ruger filing covers much the same ground, though in less detail. Like American Outdoors, it states that it does not sell directly to consumers, as if this absolves it of all responsibility when their products are used criminally. Both companies make semi-automatic rifles of the kind used in the Parkland and other school shootings, and have confirmed their intention to continue making such weapons. Both companies’ stock prices dropped dramatically for a fortnight following the Parkland shooting but have since recovered and have been rising ever since, despite both companies reporting declining sales.