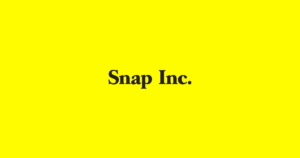 Sound too ridiculous to be true? Not if you’re a Snap class A stockholder. But who is?
Index funds will have to buy Snap shares if Snap gets listed on any of the major market indices. Many of them are distinctly unhappy about having to buy a share that not only does not bring with it 1/10 of a vote but no vote at all. So, both the Council of Institutional Investors (CII) in the US and the Investment Association in the UK have written to the various index firms (S&P, FTSE and MSCI) calling for a public consultation on whether non-voting equity should be included.
The letters note that a number of indices already exclude non-voting shares. For example, the CII letter to MSCI says: “We note that the MSCI Global Investable Market Indexes exclude derivative equity and the MSCI US Equity index further excludes limited partnerships (which we understand to cover master limited partnerships [MLPs]) and limited liability companies.” The letter goes on to say that MLP units are particularly relevant. “[MLP] unit holders do not have voting rights, and the security is clearly distinguished from common equity, such that it is not deemed as appropriate for an equity index. A security that is labeled “common equity” but lacks key characteristics of common equity should be treated no differently.” The CII letters offer over a dozen different alternative treatments to consider in the public consultation.FTSE responded on April 3, saying that any proper consultation could not be completed in time for the next updates to either the Russell indices (in May) and FTSE (in June) but that it would not be including Snap at that time in order for a full review to be undertaken.

Be aware, such a review may determine that Facebook, Google (Alphabet), LinkedIn, and all the merry band of unequal voting rights companies should be excluded. On the same day, S&P actually launched its consultation survey to run until May 3, to determine what members of the investment community actually felt should be the outcome. While it has not made any announcement, Ken Bertsch, executive director at CII, said that discussions with MSCI had been positive.
The reaction of all three index providers was relatively swift, which is encouraging. “They were clearly receptive to the fact that there was an issue here,” said Bertsch. “Though that doesn’t guarantee that they’ll end up where we want them to be. And I got the impression that they were little surprised that shareholders have not been more vociferous earlier.” There were of course, a number of other trigger points where shareholders might have banded together to object, such as Google’s issuance of non-voting shares. Said Bertsch: “This came up before when Google (now Alphabet) created non-voting shares by issuing a dividend to existing shareholders in what essentially was a stock split. Suddenly public shareholders saw half of their shares denominated in non-voting shares. Some told index providers that if an index excludes the non-voting share class, they would be forced to sell non-voting Google shares and buy voting Google shares, imposing a lot of transaction costs. I think Google’s investment bankers and lawyers were very smart, and I’m sure they understood what the dynamic would be at the indexers. Facebook has the authority to do the same thing and is expected to do so soon.”
Bertsch continued: “If you look at the S&P inquiry, it seems to suggest the possibility the firm may exclude Snap on the basis that only non-voting shares are available to the public. There are 10 non-voting share classes included in the S&P 500 at the moment, but for every one of those there is a publicly traded class with voting rights. It will be challenging for indexers to remove existing index members, and one way they could avoid this is by grandfathering them. It is notable that FTSE Russell has indicated that Snap will not go into the Russell index in its annual rebalancing in June, but rather wait until FTSE Russell can complete a thoughtful consultation process. This shows that FTSE Russell is taking this pretty seriously.”
Index giant Vanguard has an opinion. “On Snap, we believe companies with limited voting rights cannot be excluded at this time solely on the basis of voting limitations if an index’s objective is to be representative of the market,” spokesperson Arianna Stefanoni Sherlock told RI.
“That said, we are, in general, troubled by the rise of non-voting and low-voting shares as the structure contradicts our belief that shareholders’ interests and voting rights should be aligned. We expect to stay engaged on this issue and it’s our hope that the exchanges, index providers, and regulators all respectively consider these implications.”
“There is a view from some market participants that it may be impossible to exclude these kinds of stocks in the long-term because if a given stock does really well outside the index, it makes the whole situation untenable. Indexes are supposed to track the entire equity market. But others believe that it’s not just non-voting shares that should be excluded, but all dual class shares. Another idea is to require a sunset provision. That way the market can made some kind of trade-off between this kind of control now and what happens five or 10 years down the line.

“Under the Snap structure, ten years down the line the two executives with all the control at Snap could have a minimal investment but still absolute control with no accountability.”Exclusion, unless a company institutes some kind of a sunset provision that will allot a vote to all shares at some point in the near future, might act as some kind of preventative and might stop companies from coming up with these kinds of structures. So how unequal does your voting right have to be before you exclude a stock?