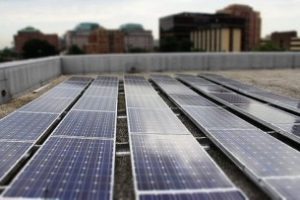 Over the past several years, sustainable energy, water, food and waste reuse have become some of the fastest growing markets in the world, with strong fundamentals and encouraging trends. Lower cost structures, technological advances, increased consumer demand, new policies and financial incentives supporting green business have fueled much of this growth.

But another trend is creating enormous potential for even more faster expansion: the production of consumable resources such as energy, water and food, and the removal and treatment of waste created by their production and use, is moving away from large, centralized facilities to smaller, distributed assets like solar arrays, urban greenhouses and localized wastewater treatment systems.

The production of assets like these, which are capable of generating stable cash flows, should be strong candidates for investment and have a risk/reward profile similar to that of mezzanine capital. Yet, outside of larger scale infrastructure, long the domain of project finance capital, many of the most innovative companies involved in the distribution of these systems have had trouble attracting financing. Why?

Generally, there is very little understanding in the marketplace about the upside of these types of distributed systems. The world of finance has simply not yet caught up with this trend towards decentralization and is unable to meet the scaling needs of businesses attempting to capitalize on this opportunity.

These projects are often too small, or too complex, for traditional banks and institutional investors, and – at the other end of the spectrum – venture capital is also mismatched.

So how can we get the financing necessary to drive the infrastructure improvements that are critical to our sustainable future?

Rooftop Solar
Rooftop solar is one encouraging standout among distributed systems; it offers a playbook on how to finance and grow the decentralized infrastructure projects of tomorrow.

Energy projects have always been a mainstay of project finance. But these deals, historically, have tended to be idiosyncratic and bespoke by necessity – windfarms or energy plants are large-scale projects that require enormous capital commitments in the billions of dollars.

When it came to rooftop solar, the size of a solar panel installation for a single consumer rooftop (in the tens of thousands of dollars) fell far below the threshold for institutional project finance to invest in on a case-by-case basis, but homeowners were still unwilling and often unable to pay these costs up-front.

To make the economics work, the early financers of rooftop solar hit upon a new model: they pooled their projects, financed multiple projects at once, and then changed the customer model by offering an easy service contract that a homeowner could pay each month, thereby eliminating the need for an upfront capital expenditure.Further, to de-risk these investments while still allowing them to be deployed more efficiently, the financers pre-identified and removed as much variation as possible, and eliminated any potential downfalls up front. For example, rather than negotiating specific plans, permits and contracts for each individual consumer sale, they pre-identified installers and system designs, established standards of credit-worthiness for each customer, and required consistent contracts, eliminating costly and time-consuming elements of the process.

The results of these actions were transformative – and everyone came out a winner. The consumers were now able to buy rooftop solar more easily, often with no money down. The manufacturers and installers were able to scale their businesses much more rapidly. And asset investors (not to be confused with the venture investors backing various startups in the market) realized substantial, consistent returns at a pre-identified rate.

What’s more, the early market entrants essentially proved the market, attracting cheaper and more mainstream institutional capital over the longer-term, further driving down the cost of capital and the end-price to the consumer. As a result, today there is a huge market for distributed solar. In fact, approximately 20% of all new investment in new renewable energy capacity in 2015 went to small distributed solar capacity projects, amounting to $57.5bn. And in 2016, investment in residential solar “was up 19% over 2015”:ttps://www.seia.org/research-resources/solar-market-insight-report-2016-year-review.

Applying the lessons of rooftop solar to other distributed systems

Eventually, the rooftop solar model was so well understood and accepted that significantly lower-cost capital flooded into the market and installations blossomed. These lessons can and should be applied to other distributed systems.

For example, let’s consider a large wastewater treatment plant. These plants, in addition to treating municipal sewage, typically also sell their services to different types of commercial customers, such as landfills, which can have a variety of expensive and difficult wastewater treatment needs (just think about how nasty the rainwater that trickles through a landfill can get). Typically the customer may pay someone to truck the water to the plant at a very high cost.

But using a model borrowed from rooftop solar, a vendor of distributed wastewater treatment systems could build a smaller, less costly treatment system onsite at the customer’s landfill. Rather than requiring the customer to pay for the construction of the system upfront (which many can’t or won’t do), the vendor can simply ask the customer to sign a standardized service contract, and then sell the installed system to a third party investor who’ll own both the system and the revenues from that service contract. There’s no money down on the part of the customer and they can lock in a consistent service price. And the wastewater system vendor gets a much easier sale, while still getting paid up front via the investor.

If we truly want to meet the UN Sustainable Development Goals and drive a trillion dollars of new capital to sustainable development, we need to finance the next wave of energy, water, food and waste deployment, which means putting actual physical systems on the ground. And many of those solutions are now ready for the investment, with proven performance and, via investment models like the one above, the promise of risk / reward profiles attractive to institutional capital.

The good news is that there are an increasing number of capital strategies and more diverse capital sources available now for these solutions than ever before. And this is not just our own approach – there are other solutions for deployment capital, for innovation funding,and for helping make customers feel comfortable making a buying decision more quickly, whether it’s for rooftop solar, a distributed water treatment plant, or an indoor fish farm.

We’re beginning to see the traction of real market change, and if we build upon the successes of industries like rooftop solar, we can expect the pace of measureable change to quicken. And that is, for me, exciting to see.