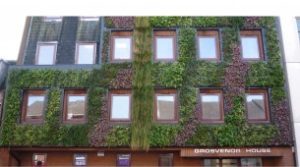 The Institutional Investors Group on Climate Change (IIGCC), which represents 120 institutional investors with €13trn in assets, has urged the European Commission to set a “nearly zero” energy standard for the buildings sector by 2050 as it reviews two EU directives covering the sector’s energy efficiency and performance.

The call comes in a new paper presented to the Commission in Brussels earlier this month. In it, the IIGCC says that as its members are big property investors, “we recognise the benefits that arise from better energy efficiency – including improved rents, yield and value flows, as well as the energy security, health and well-being more efficient buildings offer EU citizens.”

Under the EU’s ‘Energy Performance of Buildings Directive’ and its ‘Energy Efficiency Directive’, the “nearly zero” energy standard has already been set for new buildings in the bloc built after 2020. New publicly owned buildings must meet that standard by 2018. Regarding energy efficiency, the EU directives require member-states to provide lists of measures aimed at improving the efficiency of all buildings.

As the directives are now under review, and with respect to the EU’s overall effort to curb greenhouse gases following the Paris climate accord, the IIGCC says theCommission should make the nearly zero standard apply to the entire building sector by 2050.

“Energy efficiency improvements in the European property sector must form a key part of any strategy for delivering the overall EU objective of greenhouse gas emissions neutrality by 2050,” said IIGC CEO Stephanie Pfeifer in a statement.

The IIGCC paper also recommends that energy performance certificates (EPCs), which indicate the performance of a certain building, “evolve from a static to a dynamic tool.” According to the London-based investor lobby, that means amending them to reflect not just design performance but operational performance as well.

Furthermore, “if EPCs were an electronic tool, they could be updated on an annual or monthly basis (like in the US) with operational energy consumption data. This, in turn, could be used by asset owners to model and project the impact of building improvements on the EPC rating,” the IIGCC added. Authors of the paper include Tatiana Bosteels of Hermes Investment Management, Martin Schoenberg of the IIGCC and Murray Birt of Deutsche Bank.