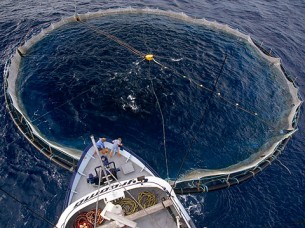 Global overheating and overuse of antibiotics could cause the $230bn fish farming sector to capsize, a risk that investors are neglecting to manage, according to warnings from $12trn-backed investor network FAIRR.

The thriving aquaculture sector means we now eat more fish from farms than from the wild, with the industry seeing average annual growth of almost 6% and delivering returns to of up to 400% over five years.

But much of the growth is based on opaque and intensive farming that is replete with ESG risks, according to ‘Shallow returns?’, a FAIRR report backed by investors including Aviva, CANDRIAM, DNB Asset Management and Norwegian pension group KLP.

“Few investors realise either the contribution of aquaculture to climate change, nor the threats the sector faces due to climate impacts such as rising sea temperatures,” said Maria Lettini, Director of FAIRR. “Investors should be aware of the sustainability risks in the aquaculture sector before they wade in too deeply.”

Fish farming is both a significant contributor to climate breakdown and is highly exposed to its impacts. Rising sea temperatures and ocean acidification in Southeast Asia, a global hub for aquaculture, could see farmed marine fish yield fall by up to 30% by 2050.

In some regions aquaculture firms are also major culprits in the overuse of antibiotics, with salmon farms in Chile using doses up to ten times higher than in chicken production. This leaves the sector highly exposed to future efforts to fight antibiotic resistance.

Furthermore, as the wild fish stocks used to feed farmed fish rapidly decline, the aquaculture industry faces difficulty sustaining populations to keep up with global demand, which is projected to double by 2050.

Lettini said: “We thought that farmed fish would save our wild stocks in the oceans, but now it’s coming to the fore that we are using wild-caught fish to feed our farmed fish – and that is causing real problems.”

The sector sees further risks from diseases like sea lice, which cost an estimated $6bn annually, and potential action to curb the effluents that aquaculture emits to the wider environment.

The report comes as the world’s biggest salmon farming company Mowi (formerly Marine Harvest) is under investigation for misreporting of chemical use – just one example of governance and transparency falling short in the sector, the report alleges.Last month, a class-action lawsuit was filed in the US accusing major players in Norway’s farmed salmon industry of price fixing.

FAIRR encourages improved management to tackle the challenges, recommending the use of probiotics over antibiotics, and increased use of fishmeal alternatives such as bacteria, algae and insects.

Innovation in the sector could also help manage the risks, according to the report. Start-ups that make mock fish products with plant-based ingredients include Sophie’s Kitchen, Good Catch Foods and Quorn Foods.

The so-called “blue economy” has been an area of increasing interest for investors in recent months.

The Nordic Investment Bank followed on its heels with a SEK2bn Baltic blue bond issuance in January. https://sebgroup.com/press/news/seb-participating-in-issuance-of-blue-bond-for-the-baltic-sea

The Nature Conservancy (TNC), the US-based NGO that helped restructure the Seychelles’ national debt for the bond issuance, has ambitions of raising $3bn to secure 20 deals in 20 countries within the next five years – capital that could protect a third of marine sources in 4 million square kilometres of ocean.

TNC partnered with Encourage Capital to release a guide last month for impact investors on the opportunities in sustainable aquaculture systems.

The report argued that responsible aquaculture is an eco-friendly alternative to the of overfishing wild species and land-band animal farming, and laid out how impact investors can benefit from the opportunity.

TNC is also working on “ecosystem insurance”, where industry dependent on coastal ecosystems pay for their protection.

On Mexico’s Yucatan peninsula, TNC has set up a tourist tax-funded trust fund that is channelled to finance routine reef maintenance.

RI is partnering with the European Commission, WWF and UNEP FI for an investor research project on the Blue Economy and will host a webinar on the topic on July 8.