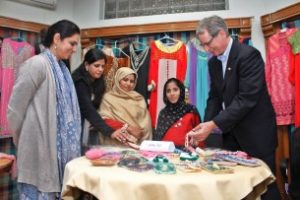 Out of 30 applicants for the prize, the Foundation’s work on credit facilities to low-cost private schools alongside capacity building and training for teachers and school owners, was recognized as outstanding for enabling access to education. Her Royal Highness the Grand Duchess of Luxembourg, who is the President of the High Jury, presented the award. She said: “Microfinance has always and remains one of my priorities. It breaks the vicious cycle of poverty and helps restore people’s dignity, because as well as receiving a loan they are also being given, and more importantly, the trust and backing of that financial institution.”
The Education Finance Programme of the Kashf Foundation counted 727 school clients and 850 school loans by the end of 2015. It had also successfully reached out to more than 150,000 students, out of whom 75% are female students. Twenty-five million children are out of school in Pakistan, and 30 percent of children are married before the age of 15.Receiving the prize, Roshaneh Zafar, Founder and Managing Director of the Kashf Foundation, said that education is a “huge equalizer” and pointed to the role of women as “economic agents” finding their voice in the family when they earn money, and sending their children 4-5 times more likely to school than men. “One of the things we do is to promote women’s entrepreneurship across low- income communities, giving women an economic voice. It’s not just about telling them what their rights are, but it is also to enable them practically to change the economic dimensions at home. Our researchers have found that when women are earning money, the number of domestic fights goes down. According to reports, 80% of domestic issues occur because of lack of money. The correlation we see in our context is that when you are empowering a woman, you are not only empowering her, but you are empowering the whole family,” she said. The European Microfinance Award is seeking to nurture innovative microfinance initiatives and is organized by the Luxembourg Ministry of Foreign and European Affairs, the European Microfinance Platform and the Inclusive Finance Network Luxembourg. It is supported by the European Investment Bank.