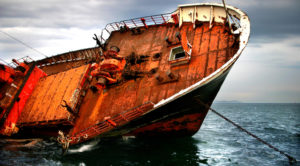 Jeanette Bergan, Head of Responsible Investment at Norwegian pension heavyweight KLP, has urged investors to step in as an oil carrier grounded off the coast of Mauritius begins to break up and spew hundreds of tonnes of fuel into the ocean.

At the end of July, the MY Wakashio, owned by Japanese firm Nagashiki Shipping and operated by Mitsui OSK Lines, ran aground at Pointe d'Esny, a known sanctuary for rare wildlife in the Indian Ocean. Although there have been attempts to minimise the impact, the marine ecosystem has been polluted with nearly 1,000 tonnes of fuel already, and last week, the boat broke in half, raising the leakage levels further and creating an environmental crisis that scientists predict could take decades to recover from.

“It’s important to make sure that these companies are doing everything they can to mitigate the damage, take responsibility for the clean-up, the consequences, and implement routines, guidelines and measures to avoid this from happening in the future,” says Bergen, who has been developing thinking around ESG in the shipping industry over recent years while at the €73bn pension scheme.

Her comments come as the Government of Mauritius, which has said it will seek compensation from “the owner and the insurer” of the vessel, has moved forward on a collaboration with the UN to help it issue $150m of green bonds over the next five years. The UN Development Programme is seeking a consultant to prepare a prospectus for issuance, as well as policy documents outlining the proposition for sustainable finance in the country.

In its RfP, the organisation said: "To address this urgent need imposed by the oil spill, the government is seeking options to create new and innovative ways to mobilise finance for development, by identifying the best possible low-cost debt instruments that are commercially attractive to a global pool of capital".

"The preferred approach is to tap into the growing sovereign green bond leveraging the opportunities of blended financing by development partners and institutions interested in supporting recovery efforts."

According to the Japanese Times, the insurance policy Nagashiki Shipping holds means it will be expected to pay up to $1bn for the oil spill, and there is no cap on the amount the company will have to pay to remove the vessel or the cost of subsequent litigation. However, treaties may limit the amount the firm has to fork out if no major faults are found on the ship, say the reports.

Mitsui OSK Lines’ share price slumped on the back of news about the ship running aground last month, but had recovered within a week.

Bergan notes that divestment should not be investors’ immediate response to accidental disasters such as this one, but says engagement must be stepped up, in the “best interest” of the company.

A spokesperson for one of Mitsui OSK Lines’ biggest shareholders, Sumitomo Mitsui Banking Corporation (SMBC), told RI: “SMBC want to extend our deepest sympathies to the people and areas impacted by this unfortunate accident. We are closely monitoring the evolving situation with MOL involving the ship accident and resulting oil spill in Mauritius.”

Investor interest in the environmental and social impacts of the shipping industry has grown over the past two years, triggered in part by increasing awareness around the practice of ‘beaching’: at the end of their lifetimes, ships are often sold to scrap dealers that take them to South Asian beaches to be broken up in ways that commonly result in significant environmental pollution and accidents.

In 2018, the $1trn Norwegian Government Pension Fund Global excluded four shipping companies and placed another on a ‘watch list’ over the practice, based on the recommendations of its Council on Ethics. Shortly afterwards, KLP also excluded the four companies.

Bergan says shipping is a particularly difficult issue for responsible investors: “This is an area where there is a real conflict between ethics and profit. The more the ship owner gets paid for the old ship [by scrap dealers], the lower the standard is when it is going to be recycled. Companies must be willing to pay the price for a better standard.”

“This is different from ensuring you’re not having an accident,” she adds. “It’s expensive to deal with these issues.”

KLP has widened its efforts on shipping and now uses information from NGO Shipbreaking Platform to assess which ship owners are in its portfolio and which ships have been recycled in which areas of the world.

The pension fund has investigated and excluded companies in Bangladesh and Pakistan as a result of its assessments.

“It's really obvious when you see the difference between the standards – some of the yards in India have quite good standards, but most still have quite a long way to go to reach an acceptable standard.”

She says there are varying levels of performance when it comes to dealing with hazardous waste and pollution, safely “cutting” the ships, and workers’ living conditions and access to healthcare.

“Some of these yards have different sites – they can have one with quite good standards and another that doesn't have those standards – so they can say: ‘I have a ship owner who would like to pay for higher standards so we’ll put the ship there, and if they don't want to pay then they put the ship on the lower standard.’ It's a hard job for us to evaluate whether the companies are doing the right thing or not.”

However, it’s worth the effort, she concludes. “As an investor you can feel quite far away from the real things happening on the ground, so when I went to India it was really nice to see some of the companies we've engaged with quite heavily on this topic were the ones who have been on the frontline in ensuring improved practices.”

And even for companies that KLP has been forced to divest because they do not “showcase a responsible standard and practice”, continued engagement is still possible, she says. Shipping corporation Evergreen has been excluded, but the pair have recently been in discussions over the progress it has made since the decision – around policies, audit reports and yard conditions. Bergan says it’s too early to say whether they will reinvest, but that the current dialogue is a move in the right direction.