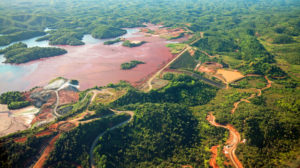 Investors could potentially be considering divesting or voting against those mining companies with unstable waste storage dams and those snubbing safety disclosure requests, as collaborative engagement efforts take on a “Climate Action 100+ model”.

It is the latest news to come out of the investor coalition led by the Church of England Pensions Board and the Ethics Council of Sweden’s AP funds that was born in the wake of the Brumadinho mine “tailings” disaster that resulted in at least 270 deaths earlier this year.

The Church of England Pensions Board’s Director of Ethics and Engagement Adam Matthews told RI that some funds are theoretically considering disinvestment or using votes against company chairs or reports and accounts, though “this is up to funds to determine”.

The initiative agreed at a summit in London yesterday to appoint lead investors to deal with uncooperative firms – 57% of which have yet to respond to a disclosure request made in April.

The coordinated engagement, to run over a three year period, will aim to secure full disclosure from companies and address how tailings liabilities are accounted for in formal company reporting.

John Howchin, Secretary General of the Council on Ethics of the Swedish National Pension Funds and Co-Lead of the Mining & Tailings Safety Initiative, commented: “There is simply no excuse to not disclose on a material risk, that as owners of these companies, we need to urgently understand. It is clear that investors’ patience with non-disclosing companies will not remain for much longer.”

The Mining and Tailings Safety Initiative, which represents $13.5trn in assets under mangagement, was joined by major insurers, banks, government regulators and academics at the high level summit yesterday at the offices of Ruffer LLP.Investors went away from the summit yesterday charged with deciding which companies they would like to lead engagements with. Those present included Robeco, Aberdeen Standard Investments, AXA IM, Royal London Asset Management, Newton Investment Management, the Local Authority Pension Fund Forum and HSBC Global Asset Management. The initiative co-leads did not confirm when asked whether lead engagers would be named once selected.

Matthews said engagement concerning the highest risk facilities was already happening but would be integrated into the collaborative program once assessment was complete.

At least 166 dams (10%) identified so far have had stability issues in the past, according to the disclosures, though some have since been rectified.

The total volume of waste logged to date rivals the size of Mount Everest, Matthews told RI. Thousands more dams are suspected to exist, though no one knows exactly how many there are.

Reuters reported unnamed investors as saying that some dams may have to be forcibly closed.

Matthews told RI: “We’ll identify a tranche that are too risky to continue with. If they belong to smaller companies, we need to look at whether there needs to be a mechanism to support them to be able to be removed.”

The initiative is using the disclosures to put together a publicly accessible database which it plans to launch in time for the anniversary of the Brumadinho disaster and identify high risk dams and companies in need of urgent engagement.

The portal – currently available to initiative members in a draft form – has been funded so far by a partnership of UNEP, Church of England Pensions Board and the Council of Ethics for the Swedish National Pension Funds.

Partners for the project are academic foundation GRID Arendal, which supports the UN on science and research, and UK-funded not-for-profit tech firm Satellite Applications Catapult.

Rather than monitoring dams for safety, the satellite data will be primarily intended for identifying tailings dams and their locations.