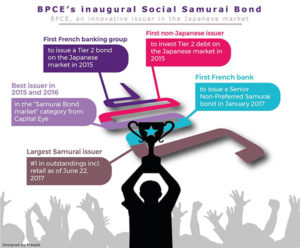 The social bond will refinance loans to the clients of the groups 15 Banque Populaire banks and 16 regional Caisses D’Epargne in the education, healthcare and social sectors.

French investment bank Natixis, a subsidiary of Groupe BPCE, and Japanese banking group Mizuho advised on the social-impact component of the bond of which PWC will be the external auditor.

The first green Samurai bond was a Climate Awareness Bond from the European Investment Bank in 2014.

Speaking to Responsible Investor, Olivier Irisson, CFO of Group BPCE, said the move reinforced its commitment to the Samurai bond market with the added innovation of the social element. Groupe BPCE holds the title of the world’s largest issuer of samurai bonds.

Irisson said the social element of the bond was innovative as it was directed at the retail market – refinancing clients through its regional banks. BPCE believes that retail banks have a role to play in financing the energy transition and a socially-responsible economy, and that this should be financing clients, not just their projects.Also speaking to RI, Roland Charbonnel, Director Group Funding & Investor Relations at BPCE, said the model was a departure from the ICMA Green and Social Bond principles, which focus on project finance.

“We would like a broader scope,” said Charbonnel. “And we intend to lobby for broader principles.” This will be led by Natixis, an ICMA member and parent of responsible asset manager Mirova.

Irisson added that it was an important step forward to provide opportunities to invest in SMEs and professionals, who often don’t have access to project finance or capital finance, through green and social bonds to encourage “local and regional economy or type of sustainable development”.

Eligible loans financed by the Group BPCE social bond will be selected according to the business activity of clients and will be accredited using the French Classification of Economic Activities, published by INSEE, the national institute of statistics and economic studies. Link