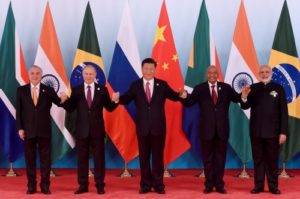 The New Development Bank is a David among Goliaths. Launched two years ago to give emerging countries a stronger voice in the multilateral development bank world, it started out with a team of five and commitments of $10bn over five years. Current payments total just $2.6bn. To put this into context, the Asia Development Bank’s operations came to more than $30bn last year alone, and at the European Investment Bank that figure was €83.8bn over the same period. Even the Asia Infrastructure Investment Bank (AIIB) – launched at the same time as NDB and with which it has close ties – has long-term commitments of more than $100bn, with $20bn already paid in. And reports from the annual BRICS summit, which closed this week, suggest that Chinese President Xi Jinping has limited its additional contribution to just $4m, with socio-political and economic issues within and between the member nations causing hiccups already.

But its size hasn’t stopped the NDB from having some pretty hefty ambitions, particularly when it comes to investing in sustainable development. The bank, informally known as BRICS Bank because it currently represents Brazil, Russia, India, China and South Africa, now has closer to 100 staff and recently released its 2017-2021 strategy. In it, it pledges to “dedicate around two thirds of all financing commitments in this period to sustainable infrastructure development. i.e. infrastructure projects that incorporate economic, environmental and social criteria in their design and implementation”.

“We don’t call ourselves a green bank, but that’s really what we’ll be known as”

“MDBs have very strong sustainability practices hardwired into their policies, usually, but in our case it’s not just our policies – sustainable development is embedded in our legal Articles of Agreement,” says Leslie Maasdorp, Vice President and Chief Investment Officer at NDB, and former President of Bank of America Merrill Lynch for Southern Africa. “The creators wanted to make sure there was no room for the bank to use public funds to continue to support the growth of coal-fired energy systems, for example.”

Its status as new kid on the block also has advantages in terms of conflicts of interest, he points out. The World Bank and others have been at the centre of public outrage in recent years about what some argue is a contradiction between their commitment to sustainable development and tackling climate change, and the financing they offer fossil fuel projects – particularly in the coal sector.

“Some other MDBs have problems around their existing clients, who might have legacy projects, and with whom they often have long-term relationships. Understandably, that can sometimes make it difficult to completely stop financing non-green projects. We don’t have a history, and so we don’t have those issues around balancing clean and dirty.”

Over time, Maasdorp thinks these factors will result in “bright green credentials” for NDB. “We don’t call ourselves a green bank, but that’s really what we’ll be known as once the bank grows up.”

So far, the NDB has approved 11 projects to the tune of $3bn. They are mainly renewable energy projects, but the most recent spate – approved last week – see it finance flood controls, water quality and supply, energy conservation, recycling and pollutant reduction in India and China, as well as technology upgrades to Russia’s judicial system.

“Energy is our first port of call because it’s a high priority need in our countries,” says Maasdorp, adding that sustainable transport will also “feature very prominently”. All its lending to date has been to government-owned borrowers, but it plans to lend to the private sector too, once it has developed suitable internal risk analysis capabilities.On the basis that most of its lending will continue to be green, NDB plans to have a healthy green bond programme to raise finance from the capital markets. It has issued its inaugural deal already: a five-year RMB3bn transaction with a 3.07% coupon, which saw demand reach more than three-times supply.

NDB – which has a AAA domestic credit rating in China – didn’t swap the proceeds into hard currency (common practise for many MDBs when they issue in local currency), so it removed foreign exchange risk from the transaction. As a result, the bank can lend the proceeds on more cheaply, it says. The local currency aspect also reduces the likelihood of depreciation costs for borrowers.

“Many of the projects we’re looking at generate their revenues in local currency. In countries like South Africa or Brazil, if you’d taken a loan in US dollars two years ago, your repayments would probably be very onerous now because of the significant depreciation that’s taken place in those countries. We hope to have a better match between asset and liabilities by doing the whole process in local currency.”

NDB is currently preparing for its second green bond in domestic currency, and then it plans to begin tapping hard currencies – once it secures an international credit rating. Moody’s and Fitch both awarded the AIIB triple-A ratings in July, but NDB is yet to get its own.

“We started in 2015 and we built this institution up painstakingly from scratch – no email system, very few staff, nothing. So naturally we couldn’t go to the international ratings agencies and ask for a credit rating. But for the bank to earn its stripes, that’s what we need, and we’re hoping that before the end of 2017 we will have a solid, investment-grade rating. That would reduce our cost of funds – another way we could on-lend at more competitive rates.”

Although sustainability is at the core of the bank, the NDB takes a “pragmatic” approach to ESG standards, and doesn’t have a concrete set itself.

“We do have an ESG policy, but our model is that we don’t impose on our members standards which aren’t in line with their existing regulatory framework – we’re not interested in designing policies from ivory towers and then insisting they must be obeyed.”

This flexible approach is possible partly because of the structure of the NDB, which was conceived as an alternative to many of the more established development banks, seen by many to place control in the hands of developed countries.

“We’re unique in that our members – the shareholders, who lend the money – are also the borrowers. That means our board members wear two hats: they have to think about what’s in the best interest of the bank and the countries, which makes the interests aligned.”

That may become more complex, though, Maasdorp admits, if the bank is successful in its goal of attracting more members. “It was never the plan to have just five member countries. The NDB Board of Governors has already approved the terms, conditions and criteria for new members, which enables the bank to begin the process of opening up for new members.”

NDB’s Articles of Agreement make provisions that 25% of the equity of the bank will be set aside for developing countries and emerging markets, with a further 20% for advanced industrialised countries. Those rumoured to be considering membership include Indonesia, Mexico and Turkey, and NDB has authorisation to raise up to $100bn from members under this expansion (with its current members, it can raise up to $50bn).

“Once you have that broader geographic footprint, you become more significant as an institution – you’re able to increase your capital, and there’s a lot more impact you can have.”