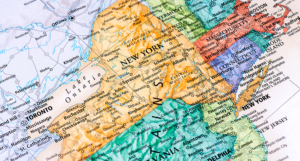 “This is not the last that you’re going to hear from us in terms of allocations – we’re going to be doing a lot more in this space in a really short time. Additional allocations in both active and passive strategies will be forthcoming,” Robert Arnold, Director of Public Equities at New York State said.

New York State announced in spring that it would be exploring “global equity climate index strategies” in the progress report on its 2019 Climate Action Plan. But Arnold told RI that the fund has been considering these sorts of strategies for a long time.

The giant fund, for instance, was an investor in the pioneering HSBC Climate Change Index in 2009. But despite being “a well-constructed index”, Arnold said that strategy “didn’t get enough traction in the marketplace and HSBC withdrew support for it". (RI has approached HSBC for comment)

The landscape has changed since then. Asset owners are increasingly being drawn towards ESG benchmarks, particularly in Europe where investors are shifting towards indices aligned with the EU’s climate benchmarking rules.

New York State has an equity portfolio of around $140bn and Arnold described index funds as the “centerpiece of the fund’s strategies for many years”. But “in order for us to put our large assets to work and meet the Comptroller’s goals of being Net Zero [by 2040],” he said, “we need to find more low carbon index strategies.”

New York State Comptroller, Thomas DiNapoli, who serves as the sole trustee of the pension fund, also committed in 2019 to allocating $20bn to climate solutions over the next decade as part of fund’s climate plan.

In 2016, New York State collaborated with Goldman Sachs Asset Management on a low carbon index, which the fund currently invests around $7.5bn through.

Arnold said since that work with Goldman the fund has been “approached by many new entrants in the marketplace”.

The recent selection of FTSE Russell’s transition index followed an extensive sweep of the market, RI was told. “We wanted to give new developers of indexes a fair hearing and to get a complete view of the opportunity set available,” Arnold said.

He added that usually the fund is very staff driven when it comes to assessing products in the market, but because of the sheer number of opportunities it sought the help of consultant Callan Associates.

Callan Associates worked with an internal team at the fund, including Siwo, and staff from its corporate governance and global equities team to narrow the field down to 14 or 15 key players.

Arnold told RI that while FTSE Russell’s strategy was “possibly the most well thought out, novel approach”, he was “very impressed with the line-up of index providers”.

The new index has helped “ready the portfolio for the transition to the low carbon economy”, Arnold said. Whereas the Goldman’s low emission index focuses solely on carbon reduction – 75% compared to the Russell 1000 index – the FTSE one considers a broader range of factors, including fossil fuel reserves, carbon emissions, green revenues and management commitment and quality in dealing with the challenges of climate change.

Arnold added that both strategies are “effective and important steps in achieving our Net Zero goals”.

When asked about the costs involved in lower carbon indices, Arnold told RI that they are “only slightly more expensive than a cap weighted index fund and much less than active managers".

RI was also told that when it comes to allocating to lower carbon strategies a key factor is tracking error. “That's why the Goldman Sachs Asset Management strategy is $7.5 billion, it's very tight. The further out you go in terms of tracking error the riskier it is, and we must adjust our allocation accordingly,” Arnold explained.

When asked if investors might need more leeway when it comes to tracking error to deal with climate risks, Siary told RI that unless there’s an immediate shock to the system, these “[low carbon index products will track tighter to the market cap weighted indexes because they will start to reflect that shift as well”.

Siwo echoed this, saying that “divergence is going to be tighter, partly because, as we can see, even in the major indices, some companies are being excluded.”