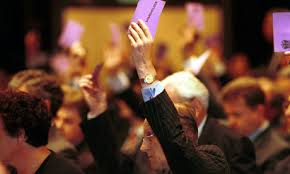 Despite the fact that the SEC has allowed companies – Alaska Air, HP – to exclude shareholder proposals requesting that companies hold in-person annual meetings, the Sisters of Saint Francis, among others, have submitted resolutions to Comcast and Conoco asking for in-person meetings. Both had indicated that they were moving to virtual meetings. The two proposals got very different responses. As Tim Smith of Walden Asset Management explained: “ConocoPhillips, to its credit, thoughtfully reflected on the issues in the resolution and after discussion passed a board resolution returning to the in-person meeting.” In contrast, Comcast asked the SEC if it could omit the resolution from its proxy, arguing that it is a minor administrative matter and asking for its exclusion as an ordinary matter of business that should be decided by management. The Sisters have objected to this argument, saying that it is a “significant policy issue and good governance”, and cite CII opposition to the practice.If you don’t want shareholders to be able to ask challenging questions of either the board or management, a tightly-controlled virtual only meeting is the best way to do this. The Sisters’ letter refers to the inability to address the board or top management face to face, the ability of those controlling the meeting to block certain questions and statements from shareholders, and the inability of shareholders to present their resolutions in person.
Comcast Class A shares are widely held, but they only entitle holders to 0.1173 votes per share, while chairman and CEO Brian Roberts’ Class B shares – he owns them all – entitle him to 15 votes per share. This means he outvotes the top five institutional holders altogether, for example. In fact, Roberts controls a third of the voting power of shares in the company, so getting any resolution passed would be difficult even if it got on the proxy. However, the SEC gave Comcast permission to exclude the proposal, citing it as ordinary business, so we’re never going to find out.