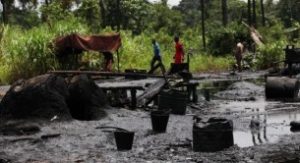 In mid-October, a delegation of the International Board of the Extractive Industries Transparency Initiative (EITI), led by EITI Chair Rt. Hon. Clare Short, a former UK Minister, travelled to Nigeria. This preceded regular board meetings in the Ivory Coast a few days later. In Nigeria, we met the Nigerian President, Dr Goodluck Jonathan. He expressed his support to the Nigerian EITI (NEITI), and committed to strengthen its leverage. He also spoke about oil theft. According to estimates by, among others, NEITI, Chatham House and the Economist, an average of 60,000 to 100,000 barrels is stolen every day. Nigeria is the world’s 10th largest oil producer with a 2011 output of some 2.2 million barrels. At an oil price hovering around USD 100, the theft adds up to a few million USD daily. For a country with 80% of government revenues dependent on oil and a 2010 GDP per capita of 2,450 USD (purchasing power parity; sources: IMF, World Bank), this is a lot of money. It is no surprise that the President called on EITI for support. The key question, though, will be whether he considers EITI a true partner, or as a convenient means to outsource a nasty problem. Oil theft is more complicated than it might seem. A recent report by Chatham House seems to conclude it’s so complicated it can’t be solved. Yes, oil theft is more than hopeless youth punching a little hole into a pipeline and siphoning off a few litres of oil with rusty jerry cans. This is organised crime involving hard-nosed professionals, bribed politicians, security forces, military and oil-industry staff, chiefs of indigenous peoples and high street commodity traders. After all, you need huge shipping vessels to do the job on an ‘interesting scale’, clients large enough to absorb the volume, and money laundering machines to help you enjoy your proceeds. Besides the ones doing the dirty job, this doesn’t work without involvement of many white collared individuals as well. That shouldn’t come as a surprise, given Nigeria’s relentless corruption. Taken together, the complexities of the business might attract even darker figures like terrorists and human traffickers.How can the problem be tackled? First of all, one needs to shed light on the volumes being stolen. In order to do so, several countries’ export, import, production, and domestic use data would have to be matched over time. As many countries do not possess these data as of yet, helping them produce it in the first place would necessitate long-term investment. EITI already plays an important role here in almost 40 countries. However, supranational agencies, like the World Bank or IMF, would need to weigh in with their expertise for number crunching. Placing meters on well heads would help to understand how much oil gets lost between the point of production and further handling. Industry and independent experts should investigate the technical and cost/benefit options of doing so. Then, the movement of the stolen crude would have to be traced through blending and refining. The sheer vastness of the Niger Delta is a challenge in itself. The waters off the coast of Somalia are also huge, yet the international community is making some headway there in making pirates’ lives harder. So why can the lessons learned not be applied in Nigeria? Finally, the remaining question is where does all the money go? Shipping related data is essential, as thieves need to get hold of ships to begin with. International financial institutions are largely involved in ship financing, and, against their will, they could be accused of complicity in money laundering and trade of illicit crude. They should have a keen interest in bringing their expertise to the table. EITI can play a role in helping countries produce payments data in a transparent, credible and robust manner. But it cannot solve the incredible complexities of oil theft on its own. Neither can Nigeria. What is needed is a concerted effort driven by strong political leadership at the national and international level. If the Nigerian President really does have the will to get on top of oil theft, he is right to consider EITI a valuable partner. However, instead of overtasking EITI, he will need to gather international heavyweights around him. Good luck, Jonathan!

Manuel Adamini is Head of ESG-research at SNS Asset Management and David Diamond is Global Co-Head of ESG, Allianz Global Investors. Diamond is a Board Member of the Extractive Industries Transparency Initiative (EITI), representing the over 80 institutional investors world-wide who support EITI. Adamini is his Board Alternate.