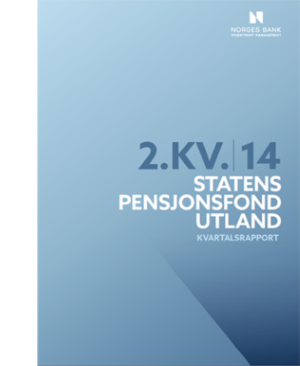 Norges Bank Investment Management (NBIM), the arm of the Norwegian central bank which runs the NOK5.5trn (€650bn) Government Pension Fund, has set up a research project to look at the link between mining companies’ profitability and environmental, social and governance (ESG) risk factors.

The project partners include Colombia University, the New York-based research university, and Washington-based non-governmental organisations the World Resources Institute (WRI) and the Rights and Resources Initiative (RRI). The WRI is focused on six areas – climate, clean energy, food, forests, water, and cities and transportation – while the RRI specialises in forest land tenure issues.

The project, formalized in the second quarter of 2014, is in two phases, NBIM said. “In the first phase of the project, we will build a database of information on water management, deforestation, land rights, and social and regulatory conditions.
“In the second phase, we will explore the relationship between mining companies’ profitability and environmental, social and governance risk factors.” The news comes in the fund’s new second-quarter report released today (August 20).
Meanwhile, NBIM has also today written to the European Securities and Markets Authority (ESMA) regulator on the implementation of the Markets in Financial Instruments / Regulation (MiFID/MiFIR) regulations.

“We are under no illusion that all incentives can be aligned and moral hazards resolved,” the giant investor says in the letter. But the current regulatory framework was “not sufficiently flexible” to balance all marketparticipants’ interests as algorithmic trading is now “completely dominant”. And it called for High-Frequency Trading firms (HFTs) to be studied to see the impact they have on other market participants. While HFTs are a potential source of liquidity, Norges argues, they “should compete on a fair basis”.

“We will explore the relationship between mining companies’ profitability and ESG risk factors.”

Also announced today was a doubling of NBIM’s ‘leader group’ to 12. “We are setting up a separate leader group for real estate, reorganising the investment departments in line with the main strategies for the Government Pension Fund Global, and enhancing internal control by creating a new position in the leader group for control and compliance,” it said.
Three Chief Investment Officers (CIO) will be responsible for the fund’s three investment strategies. They are: Ole Christian Bech-Moen (Allocation Strategies); Øyvind Schanke (Asset Strategies); and Petter Johnsen (Equity Strategies). Dag Huse becomes Chief Risk Officer, Jan Thomsen will be Chief Compliance Officer, while Age Bakker and Tronde Grande will continue as Chief Operating Officer and Chief Administrative Officer respectively. A separate leader group for real estate is being set up. Karsten Kallevig will continue as Chief Investment Officer, while Lars Dahl will serve as Chief Risk Officer for Real Estate.