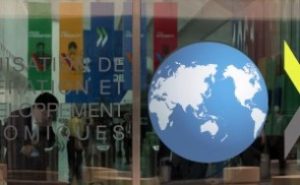 A major report by the OECD on long-term investing has taken an interesting helicopter view of the strategic position on infrastructure, climate change and impact finance at 99 of the world’s largest asset owners.
The survey reviews the assets/asset allocation of large pension funds (LPFs) and public pension reserve funds (PPRFs) that represent about 1/3 of the total worldwide assets held by this class of institutional investor. It was conducted as part of the OECD Project on Institutional Investors and Long-Term Investment for a sustainable economic future carried out under the G20 Chinese presidency this year.
The report aims to get policymakers to consider how institutional investors can play a larger role in long-term finance.
Investment in ‘infrastructure and SME financing’ alongside ‘climate change resiliency and green investments’ and ‘social impact investing’
were identified as three of the six major review themes alongside ‘insourcing, co-investment and expense reduction’, ‘credit strategies and yield enhancement’ and ‘emerging markets and foreign investment’.
Pension fund investment in infrastructure, the report says, is still relatively limited, despite enjoying stable growth in the past few years, but with large potential demand. The majority of funds reviewed still prefer to invest in ‘brownfield’ operational assets in developed markets and are opportunistic in their interest for emerging market infrastructure. New green field assets are perceived as riskier and more demanding in terms of due diligence, albeit with potential higher returns. Within infrastructure, the trend is to invest mostly in energy and transport and to give smaller allocations to renewables and social infrastructure.On climate change, because pension funds have a long-term investment horizon, they are increasingly concerned by the potential impact on their carbon intensive portfolios. Large funds have started to quantify potential risks in order to find ways to hedge risks at low cost. The survey says hard data on green investments by LPFs and PPRFs is scarce but sufficient to indicate an emerging trend. In particular, it notes an increase in the number of investments and size of allocations to green bonds, especially by the four Swedish funds surveyed: Alecta, AP2, AP3, and AP4.
All of the funds surveyed, it says, have integrated ESG considerations into their investments.
On social impact investments, just 12 funds out of the 77 that submitted a completed questionnaire reported exposure to the sector, mostly via social impact and/or development impact bonds.
Assets in pension funds and public pension reserve funds in the OECD have never been higher, according to the survey. In 2014, the retirement systems in the OECD held $30.2 trillion in assets. The growth is likely to continue as developing economies develop their institutional investment sectors, although it will depend on policy decisions such as the establishment of national pension systems. On the other hand, other pension markets might need to undergo major structural challenges due to demographics (ageing populations), longevity risk, and sluggish growth combined with high unemployment leading to fewer contributions to pensions. In addition, while pension funds have experienced strong returns since the global financial crisis, they are still under financial pressure because of falling interest rates and higher asset values.
Link to OECD report