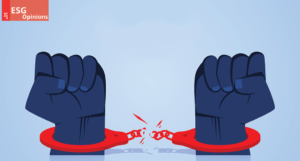 Vanguard and other asset managers want us to believe that passive investing means they can’t take active decisions to exit fossil fuels. That is not the case. Passive funds do not mean passive decisions, and we all need to stop repeating this as the truth.

That’s the finding of an important new study from IEEFA that analysed the world’s second largest asset manager’s holdings to better understand fossil fuel exposure, the impact these poorly performing companies are having on earnings and how they can exit the sector. Vanguard and others tell us, ad nauseam, that they have no control over these passive index tracking funds. However, IEEFA’s report found that Vanguard does have the ability, with a simple board vote, to exit fossil fuels in its passive funds. Exposing this is an important first step towards addressing what we call the passives problem and its dramatic impacts on climate change.

Vanguard and The Passive Problem

For Vanguard to acknowledge it has active control over its passive funds is particularly important, because as it turns out the idea behind passive investing began with Vanguard. Way back in 1976, Vanguard founder Jack Bogle launched the first mutual fund to passively follow the S&P 500. His innovation showed promise: It offered reduced risk, low fees, broad diversification, and stable and strong returns over a long-term horizon as compared to “stock picking” through active investment.

Initially the concept caught on slowly – it took a decade for Vanguard’s benchmark index to cross the $1bn in assets under management mark. Since then, passive investing has exploded. In 2019, passive equity investments eclipsed active equity investments in the US – a trend that’s unfolding globally as well. Today there is no sign the trend will reverse.

As the passive investing wave has gathered momentum, a malignant side effect has emerged. The trend is increasingly setting our economy on autopilot and pumping capital into carbon intensive companies. That money continues to flow despite market underperformance – which has clearly been the case for fossil fuels over the past decade – and it can create an ‘index effect’, which allows companies to maintain artificially high valuations and signals consistent or strong performance.

Worse, it is concentrating power with a shrinking set of asset managers like Vanguard who are moving too slowly and are conflicted on climate change. The Big Three asset managers (BlackRock, Vanguard, State Street Global Advisors) collectively vote on average 25 percent of the shares of S&P 500 companies and growing. The control the Big Three wield over companies via shareholder power is often not aligned with climate goals. Research shows that conflicts of interest inherent in the asset management industry often distort investment managers’ stewardship incentives.

Perhaps most frightening of all is the systemic risk to the financial system it creates. A growing number of financial experts are worried that we could face a climate ‘Minsky’ moment driven by rapid re-pricing of fossil fuel assets and associated losses as the world gets serious about addressing climate change. As active investment exits the fossil fuel industry due to these warnings, passive investors are becoming the “holders of last resort” ensuring that losses will be borne overwhelmingly by average investors, savers, pensioners, and retirees.

All of these elements – artificial valuations, concentrations of power in climate conflicted institutions, and systemic risk – combine to create what we call the ‘passives problem’. That means Jack Bogle and Vanguard’s breakthrough, which once showed so much promise, is now fueling the climate crisis at precisely the time when we need to radically shift course.

But as insidious as the passives problem is, the global economy is not in fact truly on autopilot. As it turns out many of these funds, and the indexes they track, are what leading academics have called passive in name only. Because while approaches are varied the reality is many funds and indices have boards that make active decisions about the methodologies they follow and even what stocks are included. It turns out passive investing can be an exercise in active decision making.

Which is exactly what IEEFA found when analysing Vanguard’s fossil fuel holdings. While Vanguard’s total fossil fuel exposure of $290bn – which makes it the largest investor in fossil fuel companies in the world – captured most of the headlines, it was IEEFA’s finding about the agency Vanguard has to exit those investments that caught our attention. According to IEEFA:

‘The decision to retain fossil fuels is Vanguard’s alone. It reserves the right to make changes to its benchmarks with only board approval. Many funds also employ a sampling strategy that frees it from owning every stock’

That might not strike the lay reader as a big deal but for those who have spent any time talking directly to the world’s largest asset managers – BlackRock, Vanguard, State Street and others – this is groundbreaking, because just about every actor in the market repeats the false notion that passive funds mean passive ownership. The implication being that asset managers like Blackrock or Vanguard are simply unable to do anything about their fossil fuel holdings, bad as they might be. Instead they’d have you believe their hands are tied when it comes to dumping controversial holdings.

That refrain was common when we interviewed more than 50 industry and NGO actors for our deepdive into the passives problem. That along with the fact that every actor blamed just about every other actor for the problem, until it became almost comical – reminding us of a three stooges routine about passing the buck.

But the notion that asset managers have no power in this system, and can’t exit fossil fuels is simply not true, and we need to stop repeating it if we have any shot at addressing the climate crisis. As IEEFA has shown, Vanguard and other leading asset managers can divest from fossil fuels, even in passive funds. But for them to make that active decision we all need to stop enabling the foundational excuse that their hands are tied. Instead, we need them to put their hands back on the wheel and steer global investment away from the proverbial climate cliff we’re currently hurtling towards.