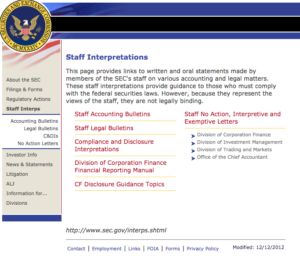 At the beginning of the month, the SEC’s Division of Corporate Finance released its latest staff legal bulletin on Rule 14a-8, the rule covering shareholder proposals. Despite fears to the contrary, none of the changes spell bad news for shareholder proponents. But what does that headline mean?
Rule 14a-8(d) can be used to exclude a proposal if it, “including any accompanying supporting statement” exceeds 500 words. The bulletin explains that as proposals have begun to include graphs and/or images, they have been challenged on the word limit. The Division restates that the rule “does not preclude shareholders from using graphics” – but recognises that there is potential for abuse.
However, images can be excluded under other provisions, such as if they are false or misleading, vague to the point of incomprehension, impugn character or reputation without the facts to back it up or are irrelevant.
Other rules are also tweaked by the bulletin. Rule 14a-8(i)(7) permits a company to exclude a proposal that “deals with a matter relating to the company’s ordinary business operations.”
This exclusion rests on two considerations: subject matter, and shareholders “micromanaging” the company. Many no-action requests, where a company objects to the inclusion of a proposal, focus on a policy issue that is not “sufficiently significant”.
These decisions, the SEC says, deadpan, “often raise difficult judgment calls”.
As with the next issue covered by the bulletin, the Division feels that the board “is generally in a better position to determine” such matters. While this should be true, it often feels that boards seek exclusion for the sake of it rather than because a proposal is part of ordinary business.Nevertheless, the Division feels that the board “is well situated to analyze, determine and explain whether a particular issue is sufficiently significant because the matter transcends ordinary business and would be appropriate for a shareholder vote” and will require that all such no-action requests will include the board’s analysis. This will help staff make decisions, though in no way does it intimate that the board analysis will be followed slavishly.
Rule 14a-8(i)(5) covers the “economic relevance” exception, that allows a company to exclude a proposal that “relates to operations which account for less than 5% of the company’s total assets” or “for less than 5% of its net earnings and gross sales for its most recent fiscal year”.

The bulletin gives some history. Prior to the current rule, adopted in 1982, staff had taken the position not to issue no-action letters as long as the proposal “reflected social or ethical issues” no matter how small in relation to the rest of the company’s business. When this practice was reversed, a company was immediately sued, successfully, and the court ordered the SEC to return to its original practice.

It seems like the SEC would like to inch back to the real economic relevance test, but, now, when a proposal’s significance to a company’s business is not obvious, it may be excluded unless the proponent proves that it is “otherwise significantly related to the company’s business” as a whole, outside the immediately relevant 2%, or whatever. But again, these decisions involve judgment calls as above and the Division will now expect a full board analysis in order to help it make such decisions.
Finally, the bulletin addresses some potential abuses of proposals submitted “on behalf of shareholders”, or “proposal by proxy.” While this practice is not covered by Rule 14a-8, the Division stresses that the same tests for eligibility for submitting a proposal will be put to proposals by proxy, in order to make sure that the practice is not being used as a ‘getaround’.