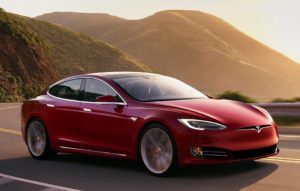 At Tesla’s annual meeting on 6 June this year, a shareholder proposal to declassify the board received over 30% of the vote. On the other hand, without Elon Musk’s 22% holding of shares, the proposal would have come much closer to a majority, at more than 45%. Clearly a large proportion of outside shareholders want the board declassified.

A classified board structure is one where director elections are staggered, which could potentially lead to complacency.

But why target Tesla at all, given its obvious success lately?
I asked Mary Phil Guinan, Connecticut State Treasurer’s Office Assistant Treasurer for Policy – the office was the proponent of the resolution – why Treasurer Denise Nappier had targeted Tesla, which seemed to be the future of car manufacturing, and very much aligned with the State’s environmental goals, rather than Ford or GM, which might present more serious governance and environmental concerns? Guinan replied that it was not an either/or situation; noting that Treasurer Nappier had engaged with both Ford and GM for over a decade. “Tesla has grown at an incredible pace and is currently larger than either Ford or GM,” Guinan continued. “We are long term investors and want Tesla to be a strong company, structured for long-term success. Treasurer Nappier believes, and studies verify, that there is a strong correlation between good governance and a company with strong, long-term value. Tesla is in transition today, simultaneously absorbing Solar City and executing a significant ramp up in production.

“Recently, the company reiterated its commitment to producing 5,000 cars a week by the end of 2017 and 10,000 cars a week by the end of 2018, up from about 1,600 a week last year, 2016. So, Tesla has committed to ambitious production plans that investors are closely monitoring, yet much of the board is still the team that led the company through its IPO in 2010. It’s a much bigger company now, and we are asking them to strengthen their governance as an important part of the foundation they are putting in place for long-term success as a very large company.”
Prior to the resolution being filed, I asked whether the Treasurer had engaged the company directly. Guinan replied: “We engaged with their lead director and corporate counsel and had a very informative conference call that also included CalSTRS, the New York City Comptroller’s office, and CtW [Change to Win]. The conversation resulted from a joint letter we had written to Tesla regarding our governance concerns, including the need to recruit more independent directors and to conduct annual elections for all directors. There was very good give and take on the call. We were pleased to hear that they are actively recruiting more independent directors to the board and that they were interviewing diverse candidates.” These new directors will expand the board rather than replace existing directors.“Clearly, since our resolution went to a vote at their annual meeting,” continued Guinan, “we did not reach agreement on the issue of annual election of all directors. We think it’s important that we continue to advocate for stronger governance at the company and that Tesla can adopt changes while preserving the company’s creativity and dynamism. Annual election of all directors provides more accountability to shareholders and permits shareholders to express their approval or disapproval of any board member’s performance each year, rather than once every three years. A classified board is often used by management to protect their interest at the possible expense of shareholders.”

“We’re not ancillary to the success of Tesla, we’re owners.”

The company opposed the proposal, first by claiming that: “By providing directors with staggered three-year terms, our current Board structure allows our directors to maximize the interests of the Company and our stockholders over the long-term, without being distracted by special interests that seek only short-term returns.” This is not a concern with any of the funds engaging the company. The opposition statement then spoke to some strategic decisions the board made that might seem ‘counterintuitive’, such as the controversial acquisition of SolarCity, that, it claims, wouldn’t have happened with a declassified board. While it seems likely that a raft of truly independent directors might have asked more questions about the SolarCity acquisition, this does not necessarily mean that they would have eventually opposed it. And then the statement closes with the claim that: “A staggered board structure reduces the risk of hostile and potentially abusive takeover tactics that seek to divert us from our long-term mission”. But, with the company the size it is now, this would seem a very unlikely development.
Guinan stressed that the proposal was not an antagonistic one. “One message we all communicated,” she said, “was that we are focusing on Tesla in large part because we very much want them to have long-term success. As funds very aware of the potential risks that climate change can pose for the long-term value of many companies, we welcome mainstream low and no-carbon options, such as those produced by Tesla.”
The proposal also listed a series of relationships between directors and either Tesla or Elon Musk, or both, that seemed relatively significant, yet the Office was not conducting a ‘vote no’ campaign against them, so it did not seem as if those relationships would lead the Office to vote against them as directors. And indeed, all directors were re-elected with overwhelming majorities. “The fact that it’s a classified board,” said Guinan, “makes it difficult to get a bead on exactly what effect these relationships are having.

“We believe that a board that stands for election annually,” she continued, “is demonstrating its accountability to shareholders, and to their responsibility to oversee the company on our behalf. We’re not ancillary to the success of Tesla, we’re owners. And being given the opportunity to annually reaffirm our relationship with the Board of Directors is a very fair ask.”

I asked if Connecticut being the sole filer on the resolution had led it to file a proxy solicitation with the SEC. “We are the sole filer of the resolution,” said Guinan, “and we networked with other shareholders about our corporate governance concerns at Tesla. The board has changed little since it went public.“Founder Elon Musk’s brother, Kimball Musk, serves on the board, as do three other directors with ties to Musk. Only one of those directors is standing for re-election at their 2017 annual meeting.”

It is difficult to see why declassifying the board would dilute the creativity and dynamism thus far demonstrated by the company, and Tesla’s opposition to the change is hard to understand. Indeed, adding more directors would seem to have a far more likely dilutive effect, yet Tesla appears to have agreed to this without much external encouragement. Nevertheless, these are the things that must happen when a company grows up.