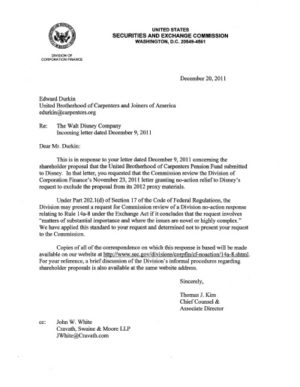 It may have an obscure name, but we all know about it. It’s the SEC’s shareholder proposal rule: 14a-8. It gives shareholders the right to put forward proposals at company AGMs and it’s shaping up as a potential battleground between investors and the Trump Administration.
It’s been called the “epicenter of the shareholder rights movement” (1) but some have said it’s ripe for reform.
The latest development is a letter supporting the right to submit shareholder proposals that was sent last week, it was announced by Ceres this morning, to top policymakers by a group of investors with more than $65 trillion of assets under management.

It was signed by Ken Bertsch, Executive Director of the Council of Institutional Investors, Mindy Lubber, CEO of Ceres, Joshua Zinner, CEO of the Interfaith Center on Corporate Responsibility, Lisa Woll, CEO of the US SIF and Fiona Reynolds, Managing Director at the Principles for Responsible Investment.

Policymakers had received an earlier letter, in February, from the Business Roundtable (BRT), which urged them to amend or repeal “allegedly burdensome regulations such as portions of SEC rule 14a-8”.

In the press release announcing the letter, Anne Sheehan, director of corporate governance at CalSTRS, said that submitting shareholder proposals is “°ne of the fundamental and long-standing rights of public equity ownership”. In contrast, the BRT claimed, somewhat tautologically, that “[the process] is being used by a small number of shareholders attempting to advance litmus test issues that are not only rarely specific to the company, but also irrelevant”.
New York City Comptroller Scott Stringer added: “Shareowner proposals ensure corporate boards listen to investors’ concerns – from increasing diversity, to supporting workers’ rights, to enacting proxy access – and implement policies that create sustainable value…. That’s why it’s no surprise the CEOs who make up the Business Roundtable want to eviscerate this right – it benefits companies and investors at the occasional expense of CEO power and pay.”
The letter says that the process does “an effective job of facilitating communication between shareholders and companies”. It adds that it gives an opportunity for communication to shareholders of all types and sizes, “from large pension funds to smaller asset managers and individual investors.” And that it is only part of the story, which includes shareholder proposals that are withdrawn when a company offers to implement the requested policy prior to a proxy being filed and to the annual meeting.

And it lists a whole range of issues that have been galvanised by shareholder resolutions that would otherwise be vain corporate governance aspirations:
• board directors’ independence
• board diversity
• auditor independence
• annual election of all directors
• the ability for shareowners to nominate board candidates
• the need to manage supply chain risks
• the need to manage climate risk and other environmental risks
• workplace diversity and non-discriminationIt continues: “The existing shareholder proposal process under 14a-8 is well functioning – it does not need to be repealed or amended.”
Of course, the listed achievements are achievements by shareholder proposals, activism, engagement and persuasive business arguments, not of rule 14a-8 itself.
The letter and its signatories do not admit a need to amend 14a-8 at all. But, is it a valid question to ask: “If it didn’t already exist, would you invent it?”

“The existing shareholder proposal process under 14a-8 is well functioning”

Are there no changes to rule 14a-8 that the signatories and other shareholder proponents would admit? What about the condition that allows companies to exclude a shareholder proposal if it “conflicts with one of the company’s own proposals to be submitted to shareholders at the same meeting”? After all, this one caused the unedifying Whole Foods proxy access fiasco that the SEC eventually sorted out.
That’s one aspect of the rule that could easily be amended. What about the exclusion of proposals that “Would disqualify a nominee who is standing for election” or “Would remove a director from office before his or her term expired.” I can imagine a number of situations where proposing either of those would benefit shareholders significantly.

The basic tenets of rule 14a-8 are: the right of shareholders to submit a proposal, the right of companies to challenge it, the right of shareholders to appeal any challenge.
This is what need to be preserved, the rest of it might be up for negotiation; though clearly the suggestion that a shareholder would need to own $1 billion of Apple shares in order to submit a proposal is simple spoiler.
The problem is that, in the current political climate with the Trump administration rushing from one liberal sacred cow to another, any acquiescence to negotiate a shareholder right is likely to end up with that right being diminished or removed; activists and asset managers will therefore seek to retain the status quo, regardless of whether it serves their interests best or could be improved.
At this point we should look to the UK, where shareholders also have the right to file resolutions… but do so about once a century.

My guess is that the reason for this difference of practice is that, until recently, corporations in the US simply did not speak to their investors, while in the UK, boards were typically more open to shareholder communications.

Now that is beginning to change, one would expect to see a lessening of the number of shareholder resolutions in the US, but the contrary is the case. That might be due to the recent majority successes of many shareholder proposals, with shareholders now expecting victory, and that may lessen over time.

But, right now, it is still their last resort and a necessary one, even if only for gadflies and/or recalcitrant companies.