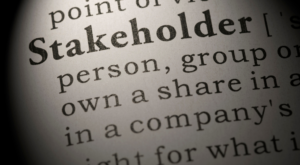 What kind of debate finds Andrew Behar, CEO of As You Sow, the US shareholder advocate, and Marty Lipton, founding partner of Wachtell Lipton, the corporate law firm, on the same side; and the US Council of Institutional Investors (CII) and Lucian Bebchuk, Harvard Law School professor on the other?

Yes, it’s the debate over the rather awkward neologism: ‘stakeholderism’.

Since the Business Roundtable (BRT) in the US published its new Purpose of a Corporation statement in August last year, there has been continuous debate about its merits.

The BRT statement inspired a series of shareholder resolutions on whether companies led by signatory CEOs had actually implemented the New Purpose or just signed on because it made them look good.

In fact, Jamie Dimon, the chairman of the Business Roundtable and CEO of JPMorgan, was the only CEO to successfully challenge the inclusion of the shareholder resolution on his bank’s proxy because ‘it was moot’, i.e. the firm already operated under a stakeholder capitalism paradigm. However, in his latest paper on the issue, Bebchuk notes that JPMorgan’s corporate governance guidelines still say: “[t]he Board as a whole is responsible for the oversight of management on behalf of the Firm's shareholders.”

Other resolutions have gone to a vote, with widely differing levels of support. According to Heidi Welsh, founder of Si2 (Sustainable Investment Institute), votes so far range from a low of 3.85% at BlackRock to a high of 9.33% at Bank of America.

While support at BlackRock was low, it did present an interesting exchange. Behar, in his presentation at the BlackRock virtual annual meeting said shareholder capitalism, which elevates profit over all other considerations, has produced the following framework: “Our social fabric is shredded. Inequality and injustice are at unprecedented levels. Our oceans and atmosphere on the verge of collapse. Our food systems are filled with carcinogens.” He draws a contrast with what stakeholderism could have produced: “When a company treats its employees with dignity, retention is increased, reducing the cost of hiring and training. When products are clean and safe, they build customer loyalty. When supply chains are respected, negative brand associations are avoided. When communities are cared for, risks are reduced.”

Like the other resolutions, the one at BlackRock asked the company to make the New Purpose legally binding and to undo the “cognitive dissonance” that sees statements by CEO Larry Fink on the urgency of the climate crisis sit alongside the asset manager voting against virtually every climate-related shareholder resolution.

In the press release following the meeting, As You Sow noted that someone on the board asked why BlackRock did not support the resolution. Fink then seemed to endorse it, saying: “A company’s ability to achieve its full potential and deliver to all stakeholders — its employees, its clients, its shareholders, and other communities — is imperative, you cannot have long-term profitability without that…and we believe that BlackRock already operates in accordance with the principles and commitments consistent with the Business Roundtable’s New Purpose.” No further details were provided about how the New Purpose had already been implemented.

Tellingly, the CII’s statement in opposition to stakeholderism makes almost exactly the same points: “BRT has articulated its new commitment to stakeholder governance… while (1) working to diminish shareholder rights; and (2) proposing no new mechanisms to create board and management accountability to any other stakeholder group.”

It is a bewildering set of opinions from constituencies who you would think would be agreeing with each other and others who you would expect to disagree.

I did not think I would live to see the day when Marty Lipton would write these words in a recent Harvard corporate governance forum post to bolster his support of stakeholderism: “corporations will operate for long-term sustainable growth in value and the social good”.

The post was a response to Bebchuk’s latest paper criticizing stakeholderism, cited earlier.

Bebchuk notes a side study of acquisitions where none of the negotiated transactions included any protection for customers and suppliers, a couple of them vaguely said that they would probably retain their HQ (community stakeholders) and a few said they adopted standard protections for workers, though these would expire soon and were considered ‘soft’.

So much for stakeholders. What about shareholders? They all made out.

Although Marty Lipton’s Harvard forum post contained no real arguments for stakeholderism, other papers of his have. One addresses one of Bebchuk’s points: “The special genius of Delaware law is that it has been animated by a fundamental sense of pragmatism and its fiduciary duty framework has afforded corporations the breathing room they need to address evolving business challenges as well as expectations of shareholders.”

To me, that seems to be saying: incorporate in Delaware and you can do what the hell you like.

In the same paper, rebutting the CII’s arguments against the BRT statement, Lipton says: “shareholders do not own the company, they own shares in the company”, which is pure semantics.

Activist investor Henry Wolfe is another opponent of stakeholderism. In a long post on LinkedIn, he writes: “accountability to all results in accountability to none” and goes on to give a series of examples showing that decisions under the New Purpose are impossible, as in most cases a ‘yes’ will benefit shareholders and a ‘no’ will benefit some other constituency, or vice versa, but in many cases not both at once. Companies will be put at a competitive disadvantage by trying to please everyone, he says.

In other words, what we have now isn’t even working.

The arguments surrounding stakeholderism often follow these patterns: ‘sounds good, but what does it mean’, or, ‘actions speak louder than words’. In many cases, different sides of the debate agree over what they want the conclusion to be, but disagree over how to get there.

And in some, this being 21st century USA, there is merely a cynical ‘adoption’ of a set of principles in order to prevent real change from happening.