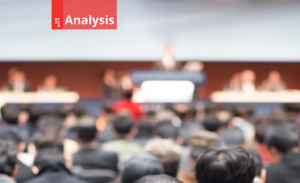 The tenure of SEC chair Jay Clayton was described as “muted”, by a New York Times article discussing the controversial firing of Geoffrey Berman, who was removed this week from his position as United States attorney for the Southern District of New York (SDNY) to make way for Clayton to take his job.

‘Obscure bureaucrat’ may be how some outside the governance world view him. But those inside have been dismayed at the way the SEC has become captured by corporations during his leadership.

This kowtowing to corporations – Clayton was a top securities lawyer for corporate law firm Sullivan and Cromwell prior to his appointment – may be what made him a likely candidate for the SDNY job. The district is well known for going after corrupt corporations, as well as prosecuting US President Donald Trump’s associates. With the way this administration operates, it is hardly surprising that Berman, who has been active in pursuing these prosecutions, should have been fired, either by US Attorney General William Barr, or by Trump. The reality is obfuscated, predictably enough, by contradictory statements from the president.

According to the same NYT article, Clayton, who knows Barr well, had indicated a wish to return to New York City to be closer to his family – the SEC is based in Washington – and Clayton had also, allegedly, played golf with Trump on the prior Saturday.

The problem with the appointment was that Berman had not said he was stepping down; and the first he heard that he had ‘offered to do so’ was a press release from the justice department saying he had. He then refused, and was fired. Clayton’s appointment, however, is more than uncertain. Senate rules – the US Senate is where positions such as these are confirmed – allow senators who represent the district where the appointment is being made to block them using a procedure known as ‘blue slips’. Both NYC senators are Democrats; minority leader of the Senate Chuck Schumer and Kirsten Gillibrand. Both have indicated that they would block Clayton’s appointment in this way.

Indeed, Schumer had already tweeted that if Clayton went ahead, his reputation would be in tatters because of the way Berman had been removed from office.

According to White House spokeswoman, Kayleigh McEnany, Trump fired Berman because he refused to transfer willingly to another post in order to allow for Clayton’s appointment: “Mr. Clayton wanted to go back to New York City and we wanted to keep him in government,” McEnany said at a White House press briefing.

According to an email seen by the NYT, Clayton informed SEC staff that he was awaiting confirmation, but remained fully committed to his work there.

But what does this mean for the SEC, already down one commissioner? Clayton may be committed, but clearly not for the long term, and it seems likely that if another ‘government’ position comes up he will leave.

The likely effect this will have is best illustrated by the resignation of previous chair Mary Jo White on the day of Trump’s inauguration. In that case, then Republican commissioner Mike Piwowar became interim chair. According to SEC rules, the president can nominate an existing commissioner as chair without Senate confirmation. An outside appointee – as was the case with Clayton and maybe his successor – requires full Senate confirmation, which can take weeks, even months, especially with the disruption of government by the pandemic.

According to SEC quorum rules, the SEC needs only three commissioners for rulemaking. A single commissioner can act in the absence of a quorum through ‘duty officer delegation’, but only to take urgent actions such as asset freezes, etc. Thus a commissioner can prevent rulemaking by abstaining or refusing to participate. Were Clayton to leave, these rules would mean that, hypothetically, commissioner Allison Herren Lee, could block any rulemaking on the controversial proposals by the SEC to impose restrictions on proxy advisory firms and to make filing shareholder resolutions impossible in most circumstances. She has indicated her opposition to these rules.

Such an outcome would be a dream resolution for the SRI community. But it involves two hypotheses, not just one.

However, since he was clearly considering leaving his current position, Clayton’s apparent ambition to be a prosecuting litigator – something outside his current CV – appears stronger than his desire to push through anti-shareholder/pro-corporation regulations.

Even if Caroline Crenshaw – who was nominated just a few days ago to replace former commissioner Robert Jackson who stepped down in February – were confirmed, she is still the Democrats’ nominee and would be unlikely to support the new proxy advisor and shareholder resolution regulations.

Furthermore, even if commissioner Hester Peirce, who has just been renominated for a second five-year term, were promoted to chair, a new Republican commissioner would have to be nominated and confirmed in order to push through the new regulations. That also could take months.

And then there’s an election in November. If Trump loses, a new Democratic president will nominate a new chair; it is typical for an SEC chair to resign if his or her ‘party’ loses. Then the rollercoaster begins again.