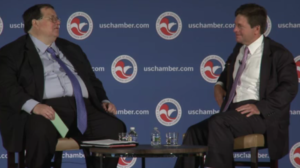 In a discussion between SEC chairman Jay Clayton on July 26 with the US Chamber of Commerce’s ‘think tank’ the Center for Capital Markets Competitiveness, Clayton noted carefully that anything he said during the discussion were “my comments and opinions, not those of the SEC”.
Given the Center’s prior utterances on shareholders – it is responsible for Shareholder Proposal Reform: The Need to Protect Investors and Promote the Longer-Term Value of Public Companies – which, while not quite as aggressive to shareholders as the Financial CHOICE Act, is not far behind it – the Center’s CEO David Hirschmann was remarkably restrained in his questioning, and Clayton followed his lead.
This restraint makes all the more striking Clayton’s comment that he felt that companies were writing for the courtroom rather than for investors. Perhaps there were a lot of lawyers in the room that might hold the two to account were they to utter anything that might breach any fiduciary rules or federal or state laws. In any case, Clayton’s comment followed on from his statement: “When I started reading prospectuses, they were rarely over 100 pages. Now we measure them in inches. I’m not sure that’s more effective disclosure.” This comment was pretty indicative of a large part of the conversation, which focused fairly closely on disclosure, another issue that the Center has been vocal about.
Commenting on the increased disclosure required by the SEC since Sarbanes-Oxley and Dodd-Frank, Clayton said: “I think sometimes when you have a great thing you load it up. We tend to throw a lot on our public disclosure system because it can handle it but we have to ask, are we overloading it?” The Center asked later in the conversation: “An issuer of 10 years since they first went public, when they first filed their proxy statement it was 35 pages long and now it’s 80 pages long, but who has the time to read all of that? Can’t we make the disclosures more effective rather than just adding volume?” Clayton responded: “More is not always better; what do people read when they make an investment decision, that’s the core principle?” The Center responded: “If disclosures are more readable, that will be a success.” While Clayton may not believe all the new disclosures are irrelevant or that many should just be dismissed, like the Center does, it is clear that he is no fan of voluminous proxy statements and other filings so it is likely that we will see movement on the SEC programme to review and reduce these.

Clayton also spoke about his desire to see more companies go public, saying: “If the fixed costs of capital are too high then it’s irrational for companies to go public.” But, he added: “The hallmarks of a public market are fairness, transparency and liquidity, but it’s an incredibly efficient market for large cap companies that could improve for small cap companies.”He spoke about his assertion that private company management spends five to six days a quarter talking with investors, but that the rest of their time is spent growing the value in the company. On the other hand, public company management time spent on reporting and compliance is a multiple of between three and four times that. “It’s a lot of days a quarter, that’s time away from growing the company, how much of a drag is that?”

His reasoning behind wanting more IPOs was explained further. If companies go public in an early part of the cycle of value creation, the public has the opportunity to participate in that. However, if they only go public when they’ve met their highest value or don’t go public at all then the only people to participate in that are private investors. He also noted his support for ‘confidential filing’, where companies can launch an IPO with minimal information on their business, their strategy and their products. “We don’t want to lessen investor protection,” he said, “but if we can get more companies to go public who need to file confidentially because of trade secrets, that’s a good thing for the public markets.”
When asked how he would measure his success during his tenure, he reinforced this notion by saying: “What really matters to Mr. or Ms. 401(k) is how we should be looking at everything. If you want to persuade us that the way you’re looking at the world is the right way to look at the world, look at it through the perspective of Mr. and Ms. 401(k). What’s really at the forefront of everyone who works at the Commission is those people who are investing for the long term, if those people are better off while I’m in this job, I’ll consider that a success.”
He also spoke about the coming CEO/worker pay ratio rule, without coming down on one side or the other – a rule that the Chamber and therefore the Center are in deep opposition to. The Center said that it was hearing from its members how difficult it is to come into compliance with the rule. Clayton replied that it’s “on the books, we continue to look at the rule. We recognise that the compliance date is coming, and, as I’ve articulated many times, you have to be clear. I’m mindful that we don’t live in a world without practical consequences. The compliance date is coming but we are mindful about looking at all of our rules.”
Another pet peeve of the Chamber – proxy advisors – also came up, when the Center said: “We don’t want the federal government taking on the role of proxy advisor, but there’s a lot more at stake on the outcomes of proxies than there used to be.” Clayton responded: “We have some entities that have a fair amount of influence on the governance of our public companies. I don’t have a definitive view today but the commission is mindful of it.” Which was about as noncommittal as his comment on the pay ratio rule.

But on the heels of this came his now infamous comments on the quiet shareholder, which were included in his answer to the Center’s questions about the shareholder proposal process. “There are a lot of things that have got on the proxy that have garnered majority support,” he said. “We live in a democratised public company system, that’s good, but if there are deeply held views by a few people but those get spread over a lot of people, you have a tendency to not look at who is bearing those costs. It is very important for us to ask ourselves how much cost should the quiet shareholder, the ordinary shareholder, how much should they bear, for the idiosyncratic interests of others, that’s how I look at that question.”Now that’s a statement that is a lot less noncommittal than his others. And, while these are his opinions, not the SEC’s, that sounds like he is pretty favourably inclined to the Center’s view, for example, that the support cut-offs for refiling shareholder resolutions should be raised at the very least, or that the SEC should be far more draconian in interpreting the business rule for excluding resolutions altogether. Neither view will be welcome to many shareholders since, in many cases, what starts small, can get very big and “garner majority support”.