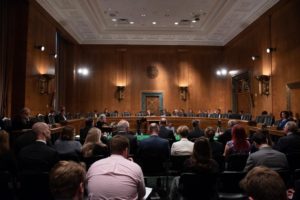 Proxy advisory frims Glass Lewis and Institutonal Shareholder Services (ISS) have both responded to a letter from the Senate Committee on Banking, which is reviewing the industry as part of its consideration of the Financial CHOICE Act, which calls for greater regulation.

Glass Lewis Response
At the same time as answering the series of questions put by the committee, Glass Lewis takes the opportunity to rebut various “misleading, inaccurate and conflicted reports” from the likes of the American Council for Capital Formation (ACCF), the Manhattan Institute and the U.S. Chamber of Commerce, and we could add to that list the Stanford Rock Center and the Main Street Investors Coalition. You might be forgiven for thinking that proxy advisors are under siege at the moment.
GL runs through some of the questions concisely, emphasising that it does not provide any consulting services to issuers, it discloses all conflicts of interest, makes its voting guidelines publicly available, and has an independent research council that reviews guidelines. It also notes that it does not exert undue influence on voters, since there is no exact alignment between the way GL advises its clients to vote and the way they actually vote. For example, directors received average support of 96% compared to GL’s FOR recommendations of 89% – a statistic that the Rock Center uses to show that proxy advisors do exert an undue influence.
There is much discussion of SEC Staff Legal Bulletin No. 20, which gives proxy advisors an exemption from federal proxy rules. GL notes that it does not have “the authority to deviate from clients’ specific voting instructions”.
The committee also asks why GL is not registered as an investment adviser, to which it replies: because it does not dispense investment advice.
It also gives a long list of the ways it discloses potential conflicts of interest. These include: if a proponent is a client of Glass Lewis; if an issuer purchased its own report or had a meeting with GL analysts or are the owners or parent company of an investor client of GL, or have a commercial relationship with GL; or if one of the owners of GL has a significant ownership position. But if a proponent is a client, it does not disclose the value of the relationship.

ISS response
Like its rival, Institutional Shareholder Services (ISS) also replied to the committee.
Unlike Glass Lewis, ISS relies on its registration as an investment adviser to show that it is already heavily regulated under the Advisers Act. It goes on to question the ‘claim’ that, with Glass Lewis, it ‘owns’ 97% of the proxy advice market and exerts undue influence. In fact, the firm states that its recommendations “shift a very small percentage (6 to 10 percent) of shareholder votes” and that this is because of information rather than recommendations.The committee’s questions – which, refreshingly, are different from those it asked Glass Lewis – include one which says that ISS is over-dominant in the market because it bases “its recommendations on factors that shareholders consider important” — as if this is a bad thing. ISS responds that most of the voting it undertakes is in accordance with the voting policies of its clients rather than its own recommendations.
A question on the SEC Staff Legal Bulletin No. 20 (SLB 20) receives different arguments from those put forward by Glass Lewis, in that ISS believes that SLB 20 fudged the distinction between unsolicited and solicited proxy advice. The firm still believes that it is subject to the exemption from the federal proxy rules, however, because it is a “registered investment adviser who is contractually obligated to furnish vote recommendations based on client-selected guidelines” and that it is therefore not providing ‘unsolicited’ proxy voting advice.
Accusations of inaccuracies are rebutted with statistics: in 2017, ISS covered over 6,400 meetings in the US and its error rate was 0.76%. It contends, rather, that what companies contend are factual errors are really disagreements over interpretive judgment and methodology, a conclusion backed by many of its clients. All issuers, even those outside the S&P 500 who receive a draft report for review prior to its publication, receive a free copy of ISS’s published analysis. If factual errors are identified at this stage, these are corrected through a Proxy Alert.
The biggest issue is, inevitably, ISS Corporate Solutions (ICS), but ISS maintains that it eliminates, or manages and discloses, all conflicts of interest, noting in addition that “ICS does not and cannot provide any client with any assurance as to how ISS will recommend”. All proxy advice clients receive the identities of all ICS clients, as well as services provided and the revenue received. Further information is also available from the compliance department. ISS does not, unlike Glass Lewis, identify these potential conflicts of interest in a proxy report as it does not want its research analysts aware of any kind of relationship.
Finally, the letter addresses the fundamental problems with the CHOICE Act: that it will make it more difficult for new firms to enter the market and that “the bill’s backers fail to provide any cost-benefit analysis to support the idea of supplanting a comprehensive and mature regulatory regime with a brand new scheme that will require several years of new SEC rulemaking only to end up with something that favors entrenched corporate interests over shareholders”. In essence, the bill seeks to solve a problem that does not exist.

While one would think that all this would dispel the rumours that reports are rife with inaccuracies or that proxy advisors force investors to vote a certain way, we live in an age of fake news, where facts are irrelevant when it comes to expressing opinions, so don’t expect the allegations to go away.