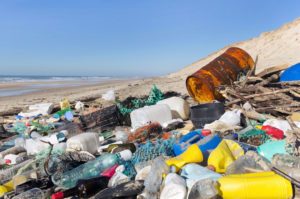 In November 2018, Philippe Kiewiet de Jonge, Senior Investment Manager at PGGM, devoted an article to one of the Dutch pension asset manager’s investee firms, lauding it as “an investment in circularity that yields high returns”.

The company was Norwegian firm Tomra Systems, a manufacturer of “reverse vending machines” that allow consumers to return empty plastic bottles for a small refund.

PGGM invests in Tomra through a €1bn impact portfolio of listed equity investments that it built on a mandate from PFZW. Tomra’s share price has more than doubled since PGGM first bought it.

This is a potential upside to the plastic waste problem brought to global attention by Sir David Attenborough’s Blue Planet II.

The flipside (at least potentially for investors) has been a rapid regulatory backlash globally as public and policy makers alike wake up to the issue.

Bottle deposit schemes, which have been rolled out in 38 countries, have been a game-changer, and Tomra – and PGGM – have been well-positioned to benefit.

In addition, in Europe, North America and parts of Africa and Asia, regulation is encouraging recycling and the reduction or banning of single-use plastics such as plastic bags, microbeads and cotton bud stems.

The European Union (EU) plans for all plastic to be recyclable by 2030, and to increase recyclable content in packaging. There’s also been EU interest in the circular economy – the idea that materials such as plastics no longer become waste and are instead valued and used as a resource.

For its part, the United Nations Environmental Assembly (UNEA), has discussed the possibility of a legally binding agreement to address marine litter and plastics.

What does this mean for investors?

Plastics are used across huge sections of the economy and have a complex supply chain. Companies at each stage will need to adapt to the evolving risks and opportunities.

PGGM’s Kiewiet de Jonge sees the regulatory backlash in Europe and further afield as an opportunity and doesn’t see it slowing down. “The impact of government here is a tailwind. I think there will be more regulations that stipulate that plastic waste has to be reduced.” He says PGGM is eyeing companies like Corbion in the Netherlands, which is developing replacements to fossil-based plastics. He admits most of these firms “are not yet ready for prime time”, but says it’s only a matter of time until institutional investors start grasping the investment opportunity.

Impax Asset Management, the sustainability funds firm, is also examining opportunities. Head of Sustainability & ESG Lisa Beauvilain says that in addition to manufacturers of recycling infrastructure and equipment, it has identified companies installing water fountains as potential key players as rules develop. In the plastic alternatives space, Impax is looking at fibre-based materials, which Beauvilain says not only share many of plastic’s useful properties but are also popular with the public: “Surveys also show consumers think fibre-based packaged food is healthier, so they’re willing to pay a premium.”Research by Schroders, the London-based fund manager, has found that consumer goods companies are at risk. It says that soft drinks companies that fail to innovate on packaging could see margins fall by 5%. Investors including Hermes and Impax have also been clear that firms such as Pepsi, Unilever, Nestle and Coke, which have been found to be among the top sources of waste in countries with insufficient collection infrastructure, face significant and material reputational risk.

But other investors say the changing regulation is not yet clear enough to fully inform investment decisions. Peter van der Werf, Senior Engagement Specialist at Robeco, the Rotterdam-based fund manager, says it’s “very challenging” to get a good overview of where the regulatory landscape will be in 3-5 years, and what this might mean for companies.

Rather than investing in solutions, Robeco has made plastic one of its engagement themes for 2019 and is conducting research which it will later use when evaluating the regulatory risks its investee companies face. Van der Werf says Robeco sees investors’ roles as working with companies to increase recycled content in their products or make them more recyclable.

In a broad response to the waste problem, investors with a combined $1trn in AUM, including Robeco, Hermes and Aviva formed the Plastics Solutions Investor Alliance launched by As You Sow, the San Francisco-based shareholder activism NGO. The Alliance will lobby large international consumer goods companies to transition from single-use plastic packaging to recyclable, reusable or compostable solutions.

As You Sow has been successful with similar action. McDonalds agreed to phase out foam hot beverage cups in the US in 2012 and then globally last year. And Starbucks committed to phase out plastic straws by 2020. These successes send a message to other corporations, but they are just the tip of the iceberg.

Nearly all plastic is, of course, derived from oil, gas and coal.
So, a burgeoning area of As You Sow’s activism is its plastic pollution-related shareholder resolutions at petrochemicals firms.

The NGO has recently filed resolutions at Phillips 66 and Chevron (which jointly own Chevron Phillips Chemical Co), ExxonMobil, and DowDuPont, requesting that they report on whether they’re leaking plastics into the environment, and what they’re doing to clean them up. Conrad MacKerron, As You Sow’s Senior Vice President, says this is information the firms have likely had access to for decades, as all are members of marine plastics reduction initiative Operation Clean Sweep, but have not reported on publicly.

Investors, however, are divided about whether plastics regulation will hit petrochemical companies financially.

The plastics and fossil fuels industries have ramped up investment in new facilities to produce ethylene and propylene over the coming decades.

But some investors and industry observers say there are serious threats to the growth projections underpinning these huge new plants.

A report by Legal & General Investment Management
(LGIM) said financing of such projects was often unrealistic.

Demand for petrochemicals accounted for around 6% of total oil demand in 2018, but most forecasters see this rising significantly as renewables push down oil demand.

The LGIM report says that when peak oil demand arrives, “the destabilising effect on oil markets will be profound” and “investors, and oil companies, need to start taking those risks more seriously”.

However, Robeco’s van der Werf and PGGM’s Kiewiet de Jonge say they don’t see demand for plastic tapering off any time soon – which they would agree shows the need for innovation further down the plastics value chain.

One investment manager looking to do this is Circulate Capital, a partnership between Closed Loop Partners and Washington-based NGO Ocean Conservancy, which is focusing its $150m strategy on what it says are strong investment opportunities in collection, sorting and end-markets in India and Indonesia.

These are two countries which are already contributing significantly to ocean plastic pollution because of a lack of recycling infrastructure, and where demand for plastics is projected to accelerate.

The ramifications of policy change have shown that the future of recycling needs to be localised and must harness the value of materials that are being wasted.

Until 2018, China had been taking an estimated 45% of the world’s plastic recycling since 1992. But its ‘National Sword Policy’ (NSP) brought unprecedented restrictions on waste and metal imports to the country, effectively seeing the country close its doors to plastics, paper, and textiles almost overnight.This has led to a huge disruption in recycling prices in the short term.

The NSP has been a wake-up call to the problems that were already inherent in a system reliant on exporting waste to emerging markets.

Consumer goods companies including the likes of PepsiCo and Unilever came in as supporters of Circulate Capital’s strategy, themselves prospective end-markets for the recycled material for use in their own packaging. April Crow, Senior Advisor at Circulate Capital, told RI: “There’s value out there in material that’s wasted and not collected and processed, not going to great end markets, so we really want to capture that value while working to have an impact on the marine debris issue itself.”

Crow says the firm sees the initial funding as “catalytic”. “We see this as an opportunity to really demonstrate that there is sufficient bankable pipeline that could unlock a lot of the larger funding needed.”

Van der Werf from Robeco is sceptical about the investment opportunities in recycling capacity in emerging markets. “It’s already difficult to get recycling off the ground in developed markets like the US, let alone looking into developing countries. To move from no waste collection to full recycling there is a lot of steps in between. So from our perspective that’s not a feasible investment thesis so far.”

Crow is more optimistic: “We can’t just copy and paste what we’re doing in developed markets today. This provides a new environment. We might be able to create whole new ecosystems.”