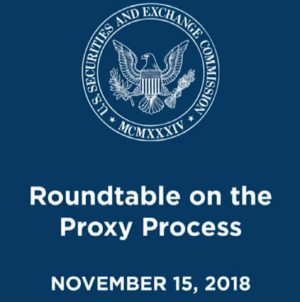 At the SEC’s Proxy Process Roundtable last week, the various panels addressed three agenda items: proxy voting mechanics and technology, shareholder proposals and proxy advisory firms. Here are some of the key takeaways of an event that aimed to address an antiquated system.

Proxy Plumbing
Although some speakers felt the whole event was a “non-issue”, the first panel dealt with a problem that was actually a problem: the outdated proxy plumbing process. About 130 shareholder meetings had over-voting in the 2018 proxy season. Though most of these were reconciled later, that figure should be zero.
John Coates from Harvard described how the OBO/NOBO (objecting and non-objecting beneficial owners, the former wish to remain confidential) system created difficulties communicating with retail shareholders. He suggested the SEC survey why shareholders elect to be OBOs. He also wanted: ‘see-through voting’, objecting that there were too many layers with sub- sub- sub-custodians.
Ken Bertsch of the Council of Institutional Investors (CII) agreed that there was no traceable link to a specific holder and demanded vote confirmation as a short-term fix that could be brought about by pre-reconciliation of discrepancies and DTCC (Depository Trust and Clearing Corporation) positions. But a fundamental rethink must come later.
Robert Schifellite from Broadridge said it was possible to reconcile votes right after the record date, giving 35-40 days to resolve any issues. Broadridge had worked with transfer agents on an end-to-end vote confirmation pilot, but again complained about lack of participation from the tabulators. Paul Conn from Computershare, a transfer agent, agreed. It should be part of the system, but when should the confirmation take place? At the record date? That’s possible, he said, but there is a daisy chain of ownership, with short positions, lent securities, and people who have bought from the people who borrowed the securities.

Universal proxy card
Darla Stuckey of the Society of Corporate Secretaries said a universal proxy card is not the most important issue, given there are only 25 to 50 contested elections out of 8,000 meetings every year. “It should be an electronic proxy with all the names,” she said, “forget cards.”
That provoked a welter of comments: mandated formatting for proxy cards; brokers and tabulators should pre-reconcile; there’s a problem identifying which is the last vote in a contested election; problems of intermediaries and the system rewarding the wrong kinds of behaviours; costs are divorced from accountability and incentives must be aligned with obligations; there is no choice in intermediaries; and all costs are passed on to issuers.
Bertsch added that blockchain was not the only solution, there was also true distributed ledger, central ledger, permission block chain with a gatekeeper; and said we should not accept the current record date situation, because positions change and there is room for too much mischief.

Shareholder proposals
Then the contention began during the panel on shareholder proposals. All of the shareholders felt that 14a, the rule governing proposals, was working just fine.
But Maria Ghazal from the Business Roundtable wanted the introduction of proposal filing fees, so as to raise the threshold for shareholder submissions.And Tom Quaadman from the Chamber of Commerce claimed that shareholder proposals were a “form of coercive speech that violated the First Amendment” though he didn’t explain why.

He wanted the ‘relevancy rule’ to be strengthened, personal grievance proposals to be excluded, full proof of actual ownership and to prevent proponents from acting for another party. Ning Chiu, of Davis Polk & Wardwell, in saying that she thought that engagement between lawyers and companies and proponents prior to ‘no-action’ letters should also be made public, said companies want to hear directly from the beneficial owners submitting the proposal.
To which CorpGov.net’s James McRitchie said: “I want to talk to the company not the lawyer they hired”. Quaadman also alleged that shareholder proposals were such a problem that they were preventing companies from going public.

AFL–CIO’s Brandon Rees who had been chuckling through most of this, found this a bit much. Most companies get a shareholder proposal every 7.7 years, he said, and most major governance, environmental and social improvements have come through such private ordering. “Private equity and M&A activity is what’s reducing the number of private public companies,” he said, “it’s got nothing to do with shareholder proposals. Public market capitalization, as a percentage of GDP, is higher than it ever was.”
Jonas Kron from Trillium also supplied some facts, rather than fake news. Shareholder proposals make up less than 2% of the total ballot items and less than 9% of companies since 2004 have actually received one. Discussing whether to increase the ownership threshold and build in holding periods, Rees said that even with inflation, the threshold, which stands at $2,000 or 2% of outstanding shares, would have only risen to $3,000. If you increase the threshold and introduce holding periods then you empower index investors and disempower everyone else. “I get a vote as soon as I get a share,” said Kron, “but I have to wait for a year to make proposal. Shouldn’t be any longer.”
Again, calls for more transparency – proponents should be named, their total holding should be revealed not just the fact that they met the threshold – were met with derision. It is companies, although they are allowed to do so, who omit the names of proponents.

Proxy advisory
The proxy advisory panel, as I have written elsewhere, turned out to be the least contentious. The investment advisor and asset management clients’ discussions about the role of proxy advisors were perfect descriptions of a business plan for a proxy advisor. “It’s our policy guidelines that drive the way our votes are cast,” said all the clients. Co-opting the term ‘robo-voting’, both KT Rabin from Glass Lewis and Gary Retelny from ISS said that, yes, over 80% of the votes they cast are strictly according to clients’ own voting policies. SEC Chairman Jay Clayton said he wanted investors to make company specific, informed voting decisions. To which the advisors replied: “We don’t have a black-and-white approach to implementing those guidelines. We do take a case-by-case approach and use judgment. The guidelines are guidelines, they are a framework for evaluating governance topics.” The Roundtable was webcast here.