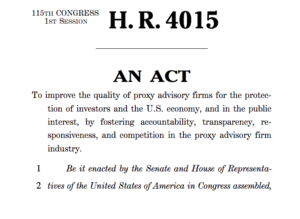 A new piece of draft legislation on proxy advisory firms in the US came up for debate on Wednesday (December 20).

There has been a flurry of activity surrounding the Bill, with a new version out on the 7th, and a new procedural bill, on the 13th, seeking to rush it through the House with only a modicum of debate, and no amendments allowed. It in full, it is H.R. 4015: Corporate Governance Reform and Transparency Act of 2017.

Then on Wednesday, the bill came up for debate. Following this, John Sarbanes (of Sarbanes-Oxley fame) asked for the bill to be sent back to committee. After some more debate on this question, the Chair, by a voice vote, announced that the noes had prevailed.

Sarbanes “demanded the yeas and nays and the Chair postponed further proceedings on the motion to recommit with instructions until a time to be announced.” So it looks like the vote was not conclusive.

Unbelievably, a Democrat has been found to co-sponsor the bill. Gregory Meeks, a representative for New York’s fifth district, has been persuaded to back it.

A source, who did not wish to be named, indicated that he had been on a call that included Sean Duffy, the sponsor of the bill, and representatives from NIRI (the National Investor Relations Institute] and NASDAQ. The call was convened with the express purpose to rally any and all parties to find co-sponsors of the bill, and in particular a Democratic co-sponsor.

There is not much about Meeks’ record to explain why he has signed up to be co-sponsor, except that, according to the source, “the screws must’ve been put on”.

His voting record also shows a 47% approval rate from the US Chamber of Commerce, which is pretty high for a Democrat. Meeks’ district is east of Brooklyn, it is solidly Democratic, and appears to consist largely of JFK Airport and doesn’t appear to house too many large corporations.

But back to the bill.

It is designed to enhance “transparency in the shareholder proxy systems by requiring proxy advisory firms to register with the Securities and Exchange Commission (SEC), disclose potential conflicts of interest and codes of ethics, and make publicly available their methodologies for formulating proxy recommendation and analyses.”It has been introduced because there are: “numerous instances whereby the two largest proxy advisory firms have issued vote recommendations to public company shareholders that include errors, misstatements of fact, and incomplete analysis.” And because: “these same proxy advisory firms encourage companies to join their service in order to have the privilege to ‘influence’ an advisory firm’s recommendations.” There is of course absolutely no evidence to support this last claim.

When asked about the bill, another source, noting the bill has been drafted “for the protection of investors and the U.S. economy, and in the public interest”, said it didn’t “pass the smell test”.

The person added: “It’s odd that a bill that is supposed to protect investors has not been supported by a single investor.”

The prime difference between the two bills is the manner in which the draft review process, the process by which corporations can review the proxy advice being provided about them, is treated.

Instead of an effective veto right given to issuers in 5311, which basically allows them to prevent the proxy advisor from issuing proxy advice if it contains “errors”, 4015 allows the issuer to present a rebuttal within the proxy advice.

While this does improve the bill slightly, it is unlikely to cause proxy advisors to support it.

The other source noted objections surrounding the timing, cost and administrative burden of implementing the bill. He also said that federally mandated intervention by corporations as a matter of right is offensive to the shareholders who have lined up against the bill in the last few weeks, claiming that their concerns have not been addressed. “This is a solution in search of a problem,” he said.

The proxy advisors remain unimpressed. ISS General Counsel Steven Friedman said: “If enacted, H.R. 4015 would undermine the ability of investors to get the independent proxy voting advice they need and would needlessly drive up costs for institutional investors.” Glass Lewis and Manifest did not reply in time for this story, but their oppositional views are on record.