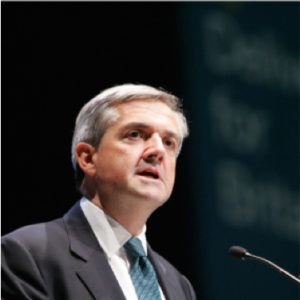 Earlier this year, Chris Huhne, the UK’s former Secretary of State for Energy and Climate Change, joined climate and carbon consultancy ET Index Research as co-chair. He tells RI that he was motivated to get involved as it demonstrates that there is potential to combine investment outperformance with doing good in terms of carbon emissions and a solution to global problems.

He speaks of a clear “first mover advantage” for investors to take advantage of the market mispricing of carbon risk.

ET Index Research provides investors with corporate carbon emissions data, portfolio carbon analytics – including footprinting and reporting services – as well as low carbon and fossil free indexes. It was spun out of the not-for-profit Environmental Investment Organisation in 2015 with funding from the Climate-KIC, the European Union’s main climate innovation initiative.

Its CEO and founder is Sam Gill, who started his career at Google. It is jointly chaired by Huhne and James Cameron, the co-founder of Climate Change Capital who chairs the Overseas Development Institute.

Huhne, a former financial journalist who was for four years vice chairman of Fitch Ratings, says the organisation’s work is a “win-win”.

“In my experience, historically, quite a lot of investors including pension funds with a lot of employee representatives want to be assured that they are getting the best possible returns and management and they are very reluctant to sacrifice performance for other objectives.

“What I think ET Index Research is able to show is that you can have quite a substantial effect in reducing investors’ risk, increasing investors’ returns and having an overall impact on the carbon emissions of the corporate sector and that’s a fantastic offer.”

Huhne was speaking as the firm released a new report on corporate carbon efficiency. The 2016 ET Carbon Rankings finds that of the world’s biggest 2,000 companies, the 1,000 least carbon-intensive have outperformed the 1,000 most carbon-intensive over the last five years.

Huhne puts this down to two possible factors: a supply side efficiency factor in companies that are tackling climate change; and investors shifting assets towards environmental conscious investments – triggering a re-pricing of those assets so they are outperforming those that are less sustainable.

Another finding is that disclosure is linked to action. The carbon disclosure leaders have improved their carbon-efficiency by 15% in a year, saving 360m tonnes of CO2, the annual emissions of Turkey, says the report.

This issue of disclosure of carbon risk is a hot topic currently in light of the upcoming publication of a high-level report making recommendations on how companies and financial institutions should disclose carbon risk. The proposals from the Financial Stability Board’s Task Force on Climate Related Financial Disclosures (TCFD), a body set up at the initiative of Bank of England Governor Mark Carney and chaired by data mogul Michael Bloomberg, are due next week.

Huhne says ET Index Research feels it is very much part of the movement aiming to achieve maximum disclosure on environmental and particularly carbon risk.He says the report shows how companies are committing to not only look at the emissions directly of the company (so-called Scope 1 and 2), but also Scope 3 emissions from both the supply chain and the customer base.

The research finds that out of the world’s 800 largest listed companies 363 have fully disclosed their direct emissions from their operations and the electricity they use – so-called Scope 1 and 2. However the figures for Scope 3 – ‘value chain’ emissions – has doubled from a meagre 1% in 2015 to 2% in 2016.

This seems perverse, especially as the ET Index Research report says that Scope 3 is material from a carbon risk exposure point of view, and typically represents the greatest component of a company’s carbon footprint.

Huhne agrees that it is essential that companies start reporting on Scope 3. “If you are an enormous consumer of steel – let’s say you are a company that is particularly big on building steel girder bridges. If your supply chain is using steel from furnaces with low carbon emissions than you are clearly going to be at much less risk from a sudden change in the carbon price than if you supply chain is entirely dependent on steel from coking furnaces where there are substantial carbon emissions.”

ET Index Research says it is one of the only firms that attempts to account for Scope 3 in its indices – if there isn’t disclosure from a company it assumes that it is in line with the worst in the sector.

Huhne, a former member of the European Parliament, predicts carbon disclosure from companies will improve for a number of reasons, including investor pressure and potential legal liabilities around the fiduciary duty of pension trustees and underwriters of IPOs and bonds.

In government Huhne helped set up the soon-to-be privatised Green Investment Bank, which he says has been moving away from its original vision for a long time. He’s also European Chairman of Zilkha Biomass Energy.

He supports a campaign by his ex-Parliamentary colleagues in the UK who are pressing the trustees of the Parliamentary Pension Fund to disclose the fossil fuel exposure of the £600m fund.

Huhne, a beneficiary of the fund, says: “I think the initiative that Caroline Lucas [co-head of the Green Party], Barry Gardiner [Shadow Secretary of International Trade] and my former colleagues have taken is absolutely right. There has been no public discussion as to why the PPF is proving so reluctant to disclose but we know from other large pension funds that they feel they are unable to maintain the same diversification across the market.”

He continues: “Anybody who is charged with looking after people’s assets have got to take carbon risk very seriously indeed. The evidence of this report is that if they do, far from being penalized in terms of performance, they night actually outperform the rest of the market. At the moment there is a clear first mover advantage for funds who want to take advantage of the market mispricing.”