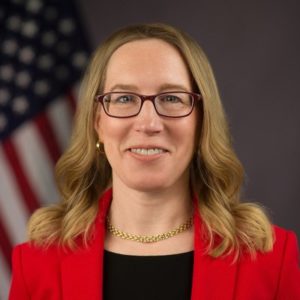 This is the second of of a two-part interview with new SEC Commissioner Hester Peirce. The first – covering capital formation, Dodd-Frank reform and the potential for regulatory harmony – is available here.

Since GDPR and MiFID II were brought up in the speech, I asked if these might be examples of regulators attempting to impose regulatory uniformity? “I wouldn’t want to speculate on regulatory intent. As a practical matter GDPR and MiFID II are having effects in the US, and that’s not surprising given how integrated our financial systems are.” Would this include regulations on buying financial and investment research? Is that having an effect in the US? “Firms that operate globally are obviously affected by that. We did issue no action relief regarding this regulation and I believe that was helpful, but trends in Europe have an effect here just as a practical matter.” Are US securities firms buying research according to those regulations? “I don’t know that it’s changed practices yet, but I know people are thinking about it and anticipating that it might; without weighing in on what the right approach is, the whole legal framework is fairly complicated. I do think IOSCO and other international regulators have a positive role to play,” she continued, “especially in maintaining contact in times of relative calm, because we’re definitely going to need to be talking if there’s a problem. We can learn from each other, and it’s easier to do that when it’s calm and not a crisis.”

Will we see the position filled rapidly? “Talk to the Senate and the President,” she quipped. I said that it was my sense that it was one of the positions that will be filled fairly rapidly, since we have only just returned to full strength again after a two-person commission for a long time, and she did not demur.

The speech in May also made mention of a hiring freeze at the SEC; how long has that been in place? “It started in January 2017. The Chairman has responsibility for the operation of the Commission, so hiring is his responsibility. The hiring freeze was put in place by the Trump administration prior to the Chairman’s appointment.”Given my recent feature on ‘unicorns’ and the despondent IPO market, I also asked her whether she was aware that there is a rising secondary market in private share sales? And that concerns have been raised that such companies can access liquidity without the concomitant requirement to make public disclosures to investors and the SEC?

“You do want to make sure that the private markets and the public markets are both working well” she answered. “We do want the public markets to be attractive because there are real benefits to broader society when investors are allowed to participate. We do want to make sure that as many people as possible can participate in the growth of these companies. We do think there’s a value to the public market disclosure regime. If the public markets are not attractive, investors lose out and the whole dynamic of the private markets changes too . So we need to think about the balance there. I have heard that some big companies are getting a lot of funding in the private market, but others are struggling to find funding, in ways that might not be true if you had more companies going public earlier. Then we might have private investors willing to invest in a wider range of companies in the private market.”
Finally, I asked her if there was anything else important that we hadn’t discussed? “One issue that we haven’t talked about, which I think is an important issue, is to think about how current innovations that we’re seeing can be encouraged. Blockchain, cryptocurrency, for example. There’s a lot of interest in these areas from many different parties. One: trying to root out fraud which is a core part of our job. But at the same time I don’t want to lose sight of the fact that there’s a lot of promise in this area. So, for me, part of the focus of my time here is to make sure that we work with people who are trying to innovate as well as making sure investors are protected; working with people to see if any changes need to be made.” Given the recent developments with Broadridge, Banco Santander and VAS Bank, I asked where she was aware of any internal discussions at the SEC about the use of blockchain and share voting? “There has been interest in seeing whether the proxy voting process is working as it should be. There have been some high-profile cases that have caught people’s attention. Innovators will be looking at blockchain in this space, and states will be looking at it too.”