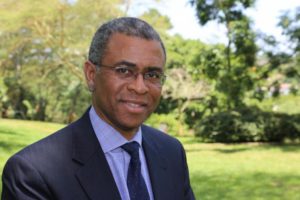 The United Nations has been clear that delivery of the 17 Sustainable Development Goals (SDGs) will need support from different actors including the business and the financial community. But there has been frustration at the lack of expertise within the UN on how the financial world works.

In an interview with Responsible Investor, UN Assistant Secretary General Elliott Harris admits the UN does not speak the language of finance.

Harris, a Trinidad and Tobago native, says the process is not easy: “We’ve been trying our hardest in UN Environment to do so over the last 25 years. UNEP FI (The UNEP Finance Initiative) has a series of partnerships over 25 years that has allowed us to build up a relationship of trust and mutual support which allows us to overcome some of the difficulties in understanding what our respective priorities are.”

Harris was speaking at a meeting organised by the Alliance of Religions and Conservation (ARC) where investor representatives from the world’s major faiths have pledged to develop a response to the challenge of the SDGs. He addresses the audience, including Ghana’s Cardinal Turkson, on the role of the faiths in investing in the SDGs.

He describes faith-based organisations as value-driven investors who can easily be supportive of the UN 2030 Agenda. “The faiths also lead by example,” he says. “Your investments have an important demonstration effect. They can reduce the perception of riskiness of new sustainable investments. They can encourage similar investments by members of your faith communities, or other actors inspired by your social legitimacy.”But Harris also suggests that for the journey towards the UN’s 2030 Agenda to be successful, there will need to be new ways of working. “UNEP FI had its annual meeting last week,” he says. “Bankers and financial institutions said when an investment has a public component there is policy risk. They have asked us to work with governments and tell them that predictability of policy is the single biggest contribution they can make to de-risking investment.”

Harris, who began his career at the International Monetary Fund, says the UN has a role in pointing out to governments the impact their policies have on the way that private investors think about the potential for investment.

Responsible Investor asks how easy it will be for government to ensure predictability of policy for long-term investments in, say, renewables or infrastructure, when the political cycle is much shorter.

“While governments have a short political spectrum there are policies that go beyond,” says Harris. “So we may have another government come in with certain priorities but that does not mean that they will overturn a commitment to provide education to the children. Public education might be a public policy commitment that is quite independent of political parties, and that is the key.”

He continues: “What we are talking about here is a new way of thinking about the way we want to interact, and the types of pattern of production and consumption that we are looking for. And those things are quite individual of political parties and therefore stretch beyond political cycles.

“What we are looking to have are governments that put in place policies for national sustainable development that we hope will be shared by succeeding governments and succeeding institutions.”

As well as a role in creating enabling policies for investment in the SDGs, government also can play a role as a co-investor or a convener, along with other public sector bodies, Harris says.

The UN is helping to facilitate some of this work. Harris describes the ‘Tropical Landscape Facility’ that has seen UNEP convene discussions between governments, investors and farmers on a finance product to prevent deforestation.

It involves BNP Paribas that wanted to invest in sustainable projects in developing countries but found it too difficult to do due diligence of individual projects at such a small scale.

Working with the Indonesian government and farmer collectives they developed a project to create investments to support agricultural productivity and renewable energy, with the objective of reducing deforestation.

In the Tropical Landscape Facility, the farmer collectives do some of the due diligence and asset managers on the ground bring together the individual projects into a financial investment vehicle.“Then the money can be dispersed in tranches of $5-$10m at a time on behalf of BNP Paribas,” says Harris. “There is also a role for the public development bank USAID [United States Agency for International Development] that will absorb the first loss in the case of some of the projects not succeeding. That was enough of a comfort for the big institutional investor to agree to this process.”

The project could eventually lead to a green bond issue: “In principle BNP Paribas would have committed $1bn. It is a tremendous amount of money. But they are lending the money to these projects in tranches and when you have a total of up to $10-100m you can issue a bond on the international markets for tropical landscape agriculture or renewable energy in Indonesia. The proceeds of that bond replace the loans that are on the books, allowing them to lend the next tranche.”