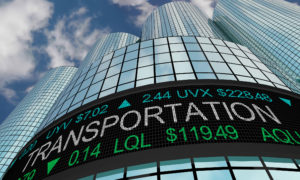 This week’s COP talks in Madrid fire the starting gun on a critical year for climate change and much of investor attention has been focused on high-emitting suppliers from energy to extractives. Yet it is the demand side, including the cars, ships and planes that make up the transport sector, that may play the most crucial role in determining whether we meet the Paris Agreement.

The transport sector is responsible for almost a quarter of the world’s energy-related carbon emissions and if the demand side can rev up its ambitions then oil and gas companies and others will ultimately be responsive to these changes. But, according to new research launched at RI New York today, the sector is well off the pace required – despite signs as shown by the auto sector that there is potential to move quickly.

That is why today’s research from the Transition Pathway Initiative (TPI), a body now backed by investors managing over $15 trillion of assets, is so important. It finds that less than one in five (19%) of the largest transport companies from British Airways to BMW are on track to limit climate change to 2∞C.

Not up to speed

TPI’s data shows that there has been some encouraging progress in the transport sector as a whole, with more than a third (35%) of major transport firms now aligned with the Nationally Determined Contributions (NDCs) agreed at Paris in 2015. This includes nine auto manufacturers, including the likes of Toyota and Nissan and two airlines – Easyjet and Wizz Air. Indeed, the auto industry is becoming steadily cleaner, with average fleet emissions falling up to 2.5% per year between 2016-2018, and 43% of car manufacturers improving the quality of their climate governance.

However the NDCs or ‘Paris Pledges’ are widely acknowledged to fall well short of keeping global warming below 2∞C.  A new UN Environment Programme report released only last week, the Emissions Gap Report, warned that even if all current unconditional commitments under the Paris Agreement are implemented, temperatures are still expected to rise by 3.2°C.

So if we look at how many of the 57 transport firms assessed by TPI are actually aligned with a 2∞C pathway or below, the need for increasing engagement by climate-conscious investors with the sector becomes even more pressing.  Of 57 firms, less than one in five (19%) are on track to limit climate change to 2°C. That includes just two car companies (Daimler & Tesla) and only one airline (Wizz Air).

In shipping, the story is more encouraging, as the research shows that the largest publicly-owned shipping companies are surprisingly green in terms of emissions intensity. 61% are already aligned to a 2°C pathway or below. Although these companies are unlikely to be representative of the sector since the biggest listed shipping firms tend to operate newer, larger vessels, which have much lower carbon intensities than most other fleets.

The data finds, perhaps unsurprisingly, that airlines are the worst performers in the sector. Aviation’s carbon performance is the worst of all TPI-analysed sectors, except for oil and gas.

Climate-conscious investors also have a real issue with the sector’s widespread use of offsetting to achieve carbon reductions as opposed to moving towards lower-carbon operating models. For example, IAG and Qantas have both recently announced a net-zero target for 2050 but it is unclear how much of these net targets will rely on offsetting.

TPI does not currently take into account airlines’ net emissions targets. While market-based measures are in principle a cost-effective way to cut carbon, it is unclear how much gross emissions of airlines will actually fall under such targets. Modelling organisations like IEA project that airlines’ own, or gross, emissions must fall. Clearly there is a need for greater ambition and transparency in airline target-setting.

It would not be a surprise if requesting clarity about the proportion of net-zero emission targets that depend on offsetting was a fruitful topic for future shareholder engagement with the aviation sector in the months to come.

The COP climate talks kicking off in Madrid this week will focus on the shift from the unsatisfactory NDCs of 2015 to more ambitious targets for 2020 and beyond. This makes a sharp acceleration in the low carbon transition likely, which would leave most of the transport sector well behind the curve. Auto makers and airlines in particular will need to pick up the pace to meet the requirements of climate-conscious investors and manage regulatory risk.

But the need for greater action does not only rest with the companies. It needs policy makers to make the changes necessary to our financial system and it needs investors to play their part too. TPI hopes its report can help empower pension funds and other investors to be more assertive with those managing their money and with the companies they invest in. As the world’s climate ambitions rev up, now is the time for the investment community to use its influence to steer poor performers towards a 2 degrees C pathway.

Faith Ward and Adam Matthews are Co-chairs of TPI.