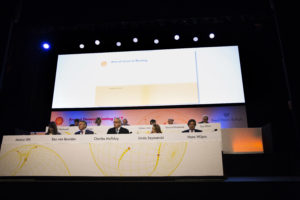 The climate change resolution at Royal Dutch Shell filed by campaign group Follow This got more than 6% shareholder support at the oil major’s AGM yesterday – despite leading investors such as Norges Bank Investment Management and the California Public Employees Retirement System voting against it.

Support for the resolution more than doubled from 2.7% last year but Follow This founder Mark van Baal was disappointed.

“We are happy that the support has doubled,” he said, “but we expected that more shareholders would vote with their investment policies in mind and would vote with us as a result.

“Our resolution asks Shell to set goals in line with the Paris climate agreement. This is exactly what many investors stress in their investment policies.”

Follow This said backers included ACTIAM, Blue Sky Group and MN and that PGGM, Nationale Nederlanden and Aegon abstained, sending a “strong signal to Shell”. It added that ABP and Robeco voted against the resolution. According to voting records, the likes of NBIM and CalPERS also voted against it.

Leading pension funds had also pre-disclosed that they were voting against the proposal.These included the Ontario Teachers Pension Plan (OTPP), the Canadian Pension Plan Investment Board (CPPIB), CalSTRS and the Florida State Board of Administration. The OTPP said it believed Shell’s current policies were sufficient.

The resolution was supported by Swiss pension fund-backed advisory firm Ethos and European proxy partnership ECGS. Ethos said it was time for Shell to “move from disclosure to action”.

In the event, the proposal gained 6.3% support, according to a Shell filing. Although the proposal didn’t pass, Shell’s top brass discussed climate change at length at the meeting.

And CEO Ben Van Buerden, who noted that the management of greenhouses gases is a new element in executive pay from this year, said “there’s a lot Shell can do to assist the world along its path to decarbonisation” – although the company cannot do it alone. The Follow This proposal, he said, was an “unreasonable ask”.