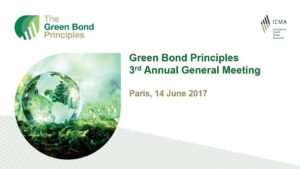 Investors and other players in the green bond market have voted to give social bonds an equal level of importance in a bid to spur on the fledgling market.

At the annual general meeting of the Green Bond Principles (GBPs) – held by the International Capital Markets Association yesterday in Paris – members passed a vote to turn social bond ‘guidelines’, launched last year as part of the GBPs, into its own set of Principles.

The Principles will mirror the GBPs, with the same four pillars: use of proceeds, process for project evaluation and selection, management of proceeds and reporting.

“The cornerstone of a Social Bond is the utilisation of the proceeds of the bond for Social Projects (including other related and supporting expenditures, such as research & development), which should be appropriately described in the legal documentation for the security,” the Social Bond Principles state. “All designated Social Projects should provide clear social benefits, which will be assessed and, where feasible, quantified by the issuer.”

Examples given of eligible projects for green bonds include:
1. Affordable basic infrastructure such as clean drinking water, sewers, sanitation and transport.
2. Access to essential services such as health, education, training and financial services.
3. Affordable housing
4. Employment generation including through the potential effect of SME financing and microfinance
5. Food security
6. Socioeconomic advancement and empowerment

The projects should be “especially but not exclusively” aimed at helping ‘target groups’, including those living below the poverty line; vulnerable groups; victims of natural disasters; excluded or marginalised communities; people with disabilities; displaced people and migrants; undereducated and underserved people; and the unemployed.

Marilyn Ceci, who heads up green bonds at JP Morgan and is a senior member of the GBPs, said that many social bond issuers “wanted a proper text from which they could take their guidance and demonstrate to investors their approach”.“What you’ll notice about the graduation from guidance to a full side-by-side set of principles is that the social bond principles mirror the green bond principles. That’s quite intentional,” she added.

In addition to the creation of the Social Bond Principles, the GBPs also created guidelines on the definition of a sustainability bond. Sustainability bonds have been a slippery concept for the market, with some critics saying the label is used too loosely, to cover projects that don’t adhere to any strict market expectations.

“Green isn’t the only colour that matters”

Some sceptics have suggested the GBPs should not address social bonds until there is greater consensus on green bonds. “No one seems to know what a green bond really is, and now they are trying to decide on social bonds too,” said one attendee at the AGM.

Another said the process had received criticism for being motivated by a desire to widen the number of existing projects that could be packaged into use of proceeds bonds, rather than pushing banks and issuers to create new green projects to generate market growth.

But Zurich Insurance’s Head of Responsible Investment, Manuel Lewin – another senior member of the GBPs – welcomed the introduction of social and sustainability definitions into the Principles, saying that “from an investor perspective… green isn’t the only colour that matters. A lot of us also care about social issues, and many of these are interrelated.”

Both sets of principles will be governed by the existing executive committee, which included eight investors, eight intermediaries and eight issuers.