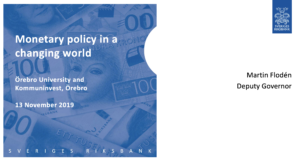 The Riksbank, Sweden’s central bank, has become the first central bank in the world to exit public debt because of climate exposure – revealing it has sold sub-sovereign notes from Queensland, Western Australia and Alberta.

Deputy Governor Martin Flodén, in a speech entitled “Monetary policy in a changing world”, said the bank was “beginning to give consideration to sustainability in our new risk and investment policy”.

“We will not invest in assets issued by issuers with a large climate footprint when we are choosing other assets than those best corresponding to our policy need,” he said.

The Riksbank has around 8% of its foreign exchange reserves in Australian and Canadian public bonds – countries that “are not known for good climate work,” Flodén acknowledged.

The exact amounts were not disclosed.

Ulf Erlandsson, CIO of Diem Green Credit, is a former bond trader at Swedish public pension fund AP4 who is a vocal critic of investors that hold Australian sovereign debt while claiming to be ‘green’. He said the Riksbank “has opened the floodgates” when it comes to discussions around the role of public debt in climate investing.

“It’s going to have to be a question asked at almost every central bank policy committee meeting in the next few months, on the back of the Riksbank’s decision,” he told RI.Unlike some of its peers, such as the Netherlands’ DNB and the Bank of England, the Riksbank does not have regulatory powers, making it slower to publicly engage with the topic of climate risk. Instead, like Italy’s central bank, its efforts centre on its own investments – some SEK400bn (€37.3bn) in Swedish government bonds, and SEK500bn in foreign exchange reserves.

Flodén told the audience that proactively investing in green bonds would be “inappropriate” in the bank’s Swedish government portfolio, but that its foreign exchange reserves had some scope to buy labelled notes if they were issued by highly-rated sovereigns, supranationals and agencies.

“Climate change affects the way the economy functions,” he said, adding that this could increase risks for the financial markets “when various branches are forced into major changeover as a result of demand, taxation or regulations being changed”. He added that it could also impact monetary policy.

The Riksbank recently announced that it had appointed Anna Breman has one of its five Deputy Governors, commencing next month. Breman, formerly Chief Economist and Head of Macroanalysis at Swedbank, is a loud voice on climate risk.

Earlier this year, she co-authored a paper titled “What Central Banks can do to Fight Climate Change”, which argued that “central banks both should and will step up research and regulations to combat climate change,” concluding: “both action and inaction will influence the financial systems significantly”.