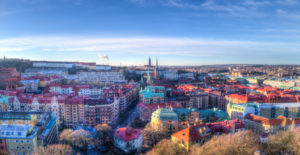 According to AP2’s CEO, Eva Halvarsson, the fund reduced the carbon footprint of its global corporate bonds and equities by 75% and 70% respectively over the summer and has divested around 250 companies, in keeping with a requirement to exclude polluting companies.

While the criteria for Paris-alignment only calls for exclusion of companies that derive a certain percentage of revenues from fossil fuels, the fund said that the exercise had effectively resulted in a divestment of the entire energy sector.

“As far as we know, this makes us unique because it includes both corporate bonds and equities worth approximately SEK200bn [€14.5bn], which is half of our total portfolio. Our ambition is eventually to align other parts of our portfolio with the PAB, too,” said Halvarsson.

A statement from the fund suggested that “the return and risk characteristics” of its investments had not been significantly affected by the exercise. AP2 is aiming to reach net zero portfolio emissions by 2045.

The move is the most high-profile endorsement of the European Commission’s project to establish credible regulatory standards for green indices that claim to align with the Paris agreement. To this end, the Commission has introduced two ‘Climate Benchmark’ categories: the more ambitious Paris-aligned Benchmark (PAB) and Climate Transition Benchmark (CTB), which is regarded as a stepping stone to Paris-alignment.

PABs are required to reduce the overall carbon intensity of its constituents by a minimum of 50% compared to the parent benchmark, while CTBs face a lower initial intensity reduction threshold of 30%. Both Climate Benchmark categories commit to decarbonise by an additional 7% each subsequent year.

The decision was hailed as a “huge step” by Andreas Hoepner, an academic at University College Dublin who was formerly a member of the Commission-appointed advisory group that helped develop the Climate Benchmarks criteria.

“The [PABs] follow an aggressive path with the exclusion of fossil fuels, while at the same time being responsible in other social and sustainable aspects. Hopefully this can also inspire other asset owners around the world,” said Hoepner.

AP2’s adoption of the standard is an early sign that PAB and CTB-badged index products could gain traction among investors despite initial market skepticism over data verification and the mechanism for tracking decarbonisation.

So far, a handful of providers have launched provisional indices which purport to meet the new regulatory standards including Solactive, MSCI, S&P Dow Jones and Robeco.

Last week, the legislation introducing the regulated Climate Benchmarks categories and new disclosure requirements for benchmark providers was published in the EU rulebook and will enter into force on December 23.

Under the new rules, providers of benchmarks which make sustainability claims will have to disclose the ESG ratings of top constituents, in addition to their performance on gender diversity and supply chain due diligence.