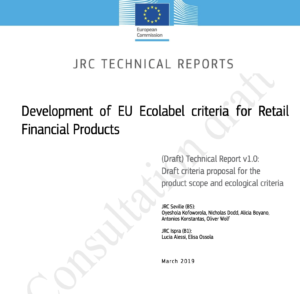 About 25 years ago, organic products were almost impossible to find in most supermarkets in Europe. Then in 1992 the EU founded the Ecolabel, identifying products with “environmental excellence”. Illustrated by the ‘EU flower’, the availability and recognition of organic products increased rapidly, which, in turn, raised public awareness.

Now as part of the EU Action Plan on Sustainable Finance, an EU Ecolabel for Financial Products is under development – a move welcomed by WWF France.

“There is also an opportunity here to redirect retail investments to sustainable funds,” says Krimphoff. “Surveys show that, if triggered, European retail investors tend to prefer investment opportunities in line with their values. But there is currently a lot of confusion about the sustainable and environmental investment products, many of which lack credibility. The Ecolabel would help end this confusion.”

The first stakeholder meeting on the EU Ecolabel for Financial Products takes place tomorrow in (April 4) in Seville. The 48-month project is being coordinated by the Joint Research Centre, Directorate B, which is based in the southern Spanish city.

“It was just an idea among many ideas,” she said. “It was interesting and surprising that this idea became concrete very fast. I think that the European Commission has understood that it was very interesting to have a simple tool to explain all these things about sustainable finance.”

The label will be developed under existing EU Ecolabel regulation that already has labels promoting ‘environmental excellence’ for clothing, electronic equipment and furniture.

Take-up of the EU Ecolabel, which is voluntary, reportedly varies widely across Europe. The top adopter is Spain, which has more than 30,000 products, followed by Italy (9,406) and France (4,820).

The EC says the EU Ecolabel for Financial Products will provide a trusted and credible label when investing in green financial products and avoid “greenwashing”. It will also stimulate comparability of investments, facilitate and enhance green investment and contribute to the achievement of climate targets by 2030.

Underpinning the Ecolabel will be the EU Taxonomy, a mooted classification system to identify which economic activities can be considered environmentally sustainable. Financial products obtaining the EU Ecolabel would need to select the investments included in their portfolio on the basis of green activities listed in the EU Taxonomy – which has been the subject of much controversy (see story here).

Husson-Traore, who is now heavily involved in the development of the new Ecolabel, says developing its rules will not be easy.“If you are talking about unlisted green funds it’s not so difficult to label private green funds dedicated to solar energy or wind energy. But if you are talking about a listed company, which could have a green part, how do you know how much it is? Is it 10, 20 or 80% of its activity? Also very few companies are now really publishing green reporting which has to [used] to assess the green parts of their activities.”

Husson-Traore says it may be difficult for some to assess whether they are really compliant with the rules.

“It is very important to have a strong signal from the market and a European guarantee of the green impact of funds is the first step. But the real question is, ‘how do you apply these categories to listed funds?’”

There are already a number of existing EU member states which have national and regional labels for green financial products, which the EC notes “differ considerably in their interpretations of green investments and sustainable investments”.

This includes the “Energy and Ecological Transition for Climate” (TEEC), a French-government backed label for green funds which RI understands is feeding into the EU label.

Husson-Traore says there is a strong correlation between the EU and French labels in that, for both, a taxonomy defines green-ness. But she admits the TEEC, which started in 2016, has had a bumpy ride that she hopes the new EU project will learn from.

“One of the mismatches about the French label is its name. There is ‘transition’ in its name. But it is a dark green label (very environmentally focused funds). I think this could be an issue for the Ecolabel. It’s the next step for the project to really embed the transition and guarantee investment into companies which are on a transition pathway.”

She says that the French TEEC label will change its name very soon to show it is ‘dark green’ and be more understandable for people. Alongside this, proposed French law, Loi Pacte, could mandate French life insurance products to offer at least one labelled SRI, green or social investment option.

The UK, in the midst of leaving the EU, is also working on its own label for sustainable funds through fund industry body the Investment Association.

But Krimphoff from the WWF suggests such industry-led labels are not as trustworthy.

“Generally speaking there are different types of voluntary eco-label. Many of the labels that currently exist are self-declared by providers or by industry federations. But the highest robustness is when governments step up to the game and set the criteria for so-called “type I labels”.

This also gives ‘teeth’ to enforce those and avoid misuse or false claims. This is the case with the EU Ecolabel which is currently one of the very successful initiatives that the European Commission has come up with. So it’s quite an opportunity even if it is rather lengthy process.”

Along with the Action Plan on Sustainable Finance, the new EU Ecolabel is connected with the Action Plan on Sustainable Consumption and Production and is being coordinated by the European Commission’s environment department,DG Environment [DG stands for Directorate-General] in collaboration with DG FISMA (Financial Stability, Financial Services and Capital Markets Union).