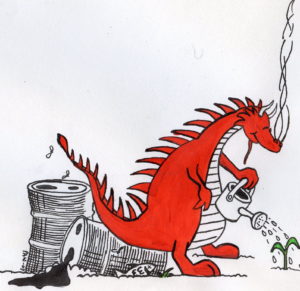 Being the biggest emerging market in the world it is little surprise that another year of double-digit economic growth is being reported in China. New figures show China’s gross domestic product (GDP) rose to 11.9% in the year to the second quarter of 2007, a record high since the mid-1990s.
Inflation jumped to 4.4% in June 2007, up from 3.4% in May. Underpinning this dramatic growth is the country’s trade surplus. Being the world’s biggest ‘factory’ and one of its largest export countries, China has provided cheap goods to US and European consumers in exchange for a foreign reserve over one trillion US dollars. The result, however, has also been a disastrous mis-pricing of the environmental cost. The export trade has brought China terrible environmental destruction and social degradation. The latest testimony is Chinese carbon dioxide emissions. A study by the Netherlands Environmental Assessment Agency, showed China produced 6,200m tonnes of carbon dioxide pollution in 2006, eclipsing the US, which emitted 5,800m tonnes over the year. The report showed that developed countries had exported a significant portion of their manufacturing competency, and related pollution, to China. A recent World Bank report found that 16 of the world’s 20 most polluted cities were in China.A draft version of another World Bank report put the total economic cost of cleaning up air and water pollution at around $100 billion a year, or 5.8% of China’s GDP.
China’s double-digit growth since 1990 has been abetted by huge levels of foreign investment. According to the United Nations Conference on Trade and Development, foreign direct investment into China jumped by $60billion in 2006 alone. Despite warnings by economists of an overheating economy, investors are still seeking opportunities. The risk is that they undermine social and environmental progress in their quest for profit.
Statistics by the Chinese State Environment Protection Agency (SEPA) signal a worsening environment. To curb widespread pollution, the agency is imposing sanctions on lax provincial governments and polluting industries. SEPA has said it will also resort to monetary tools such as introducing “green loans” and other economic incentives to boost environmental and social awareness. Policies on green tax, insurance and securities, under discussion with the China Banking Regulatory Commission, are in the pipeline. In addition, SEPA and the People’s Bank of China have embarked on the development of a credit database to log the environmental records of companies operating in China.

Companies that fail environmental assessments or violate related laws, will face difficulties in getting new loans from banks. Such overdue measures, if not too late, depend not only on the political will of SEPA (it should be noted that SEPA is an agency-level bureau, having no power to appoint provincial-level officials) but also on strengthened credit control and risk assessment capacities within banks and other financiers.
This is where Greenpeace believes foreign financial institutions, especially international giants like HSBC, can play an important role. Many financial institutions consider ‘beach-heading’ in China a strategic necessity. Some have already gained a strong foothold by investing in big Chinese banks and venturing into other financial services serving the Chinese market. It is no coincidence that the central government is paying more attention to regulatory enforcement and policy reform whilst liberalizing the financial sector. Therefore, it is in foreign banks’ own interest to take a medium- to long-term view of their involvement in the country and engage with Chinese banks over time to improve their environmental and social performance. Despite foreign banks being allowed to own a maximum 20% of a Chinese bank, they can still exert a major influence if they insist on Chinese partners adopting best practice in risk assessment and lending. For example, no Chinese bank has yet signed up to the Equator Principles on responsible project finance lending. Signatory banks with interests in China should pass on their knowledge and experience of the Equator Principles as well as other sustainability commitments they have made.Ironically, China’s huge environmental problems have created new investment opportunities to clean up pollution. Alongside raising environmental standards, economic incentives and investments in clean technologies to tackle environmental problems in China are crucial. Fossil fuel consumption must be shifted towards renewable energy. Greenpeace China recently released a report outlining a financially viable scenario of energy generation and consumption in China. Its findings were well received by socially responsible venture capitalists.
According to the Cleantech Group, an industry research body, venture-capital investment in clean technologies in China has increased from $170m in 2005 to $420m last year. An illustrative example lies in the area of energy efficiency. The Chinese central government, after missing its 4% target in cutting energy consumption last year, is compelled to meet this year’s environmental targets by enforcing new guidelines in areas such as building efficiency and energy consumption by big companies. This will require the invention and implementation of new clean technologies, opening up vast potential for venture capital investment. The SRI community in Asia, although small, has played a significant role in engaging overseas mainstream investors on the risks and opportunities in the region, which they themselves have struggled with for years. The next step is for investors in Asia to push enterprises for more information disclosure and better governance. They should also lobby regulators to force better environmental, social and governance disclosure by listed companies.

The Chinese government has been promoting what it calls the “sustainable economy” and “convivial society”. Environmental degradation in China and soaring carbon emissions fit neither of these goals and put ecological advances made in developed markets into the shade. If investors are serious about acting on environmental riskand protecting their investments before it is too late, then they will have to get to grips with investing responsibly in China. It is not possible to look both ways like Janus.
Tam Man Kei is Greenpeace China finance campaigner